Italy is an incredible destination to visit at any time of the year. With historical attractions, beautiful beaches, exciting museums and galleries and bustling cities like Rome and Venice, Italy is easily one of the most popular tourism destinations on Earth. Although there is certainly no bad time to visit the country, summer in Italy is a unique experience.

Residents spend as much time as possible outdoors enjoying the weather and there are a number of summer festivals that take place between June and August. To have a truly memorable holiday, plan to attend one or more of these top ten best summer festivals in 2012.

This annual holiday celebrates the nation as a whole and is translated directly as Festival of the Republic. Each year the Festa della Repubblica is help on the second day of June. The entire country celebrate on this special day to mark the anniversary of Italy becoming a republic after World War Two. Although it is an exciting time to be in Italy, Rome is the epicentre of the celebrations and is the ideal place to mark the festival.

People celebrating at the Festa della Repubblica in 2011.

Photo licensed under the Creative Commons, created by modenaroid

This Festival of Two World is one of Italy’s most important and prestigious art festivals. In 2012 it will be held from the end of June to the middle of July. The festival is attended each year by artists from across the globe who work in performance arts, painting, film, photography and other more unusual mediums. The festival takes place in the town of Spoleto in Umbria.

On June 24 of each year in Italy is the Feast Day of San Giovanni. Each city or region chooses to celebrate the day slightly differently. In Florence, the San Giovanni Feast Day is a incredible medieval celebration. The festival is held on the weekend following the actual feast day to allow the whole town to join in on the excitement. Enjoy feasting, medieval tournaments and illuminated rowboats that sail along the Arno River after sunset in a beautiful display.

This is one of the most famous festivals held in all of Italy. It takes place twice each summer. In 2012 Il Palio will be held on July 2 as well as on August 16. The festival takes place in Siena and the highlight of the event is a staged horse race. There are also feasts, parades and costumes throughout the city.

The masses celebrate Il Palio in Siena in 2009. 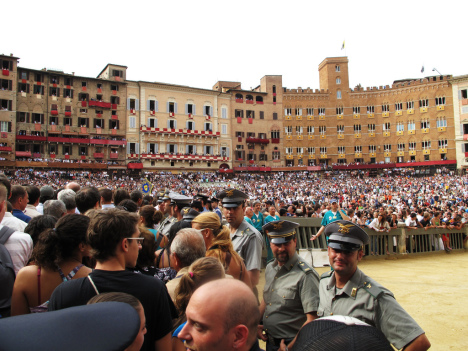 This incredible event in Matera is also held on July the second. A giant float made to resemble the Madonna Bruna is paraded throughout the entire city until it is attacked by the crowd and then burned while fireworks are set off throughout the town. The traditions date back to the medieval times making this festival exciting and truly thrilling to be a part of. The town of Matera boasts luxurious Italian villas as well as more affordable budget hotels for visitors.

Each year during the last two weeks of July the Trastevere district of Rome comes alive with this incredible street fair. Parades, concerts, food and drinks all create the jovial atmosphere that can be enjoyed by locals and visitors alike.

This exciting festival is held for nine days each year in August. The Tuscan city of Cortona hosts the event which offers exhibits and performances related to fitness, art, culture, food, wine and much more. The highlights include nightly musical events as well as incredible produce and artisan foods and wines produced within the region.

Although jousting may not be a popular sport in modern times, it becomes important once each year in the town of Ascoli Piceno. On the first Sunday of August each year, the whole town dresses up in authentic fifteenth century clothing and then a medieval jousting tournament is held for the public to spectate.

The town of Castelli is known for creating some of the best ceramic pieces in all of Italy. Each year the artists save up their imperfect pieces for the festival held on August 15. All the ceramics are thrown to the ground from the tops of buildings as a dramatic start to this day of feasting and celebrations in Castelli.

One of the best known festivals in Italy is the Venice Film Festival. Held on the Lido each year during the final week of August, the festival showcases some of the best films of the year and draws big names in the film industry. Tickets are necessary for all of the major events.