5 Things You Should Know About Pompeii If You’re Visiting

One of the biggest and best-preserved archaeological sites in the world, Pompeii is both a fascinating attraction and a chilling history lesson about the power of nature. A stop-off in Pompeii is a once-in-a-lifetime opportunity to explore this astonishing ghost town where buildings, decorations and even plaster casts of real bodies all date back to AD79 and the day of the terrible volcanic eruption. To make the most of your time here, it’s worth knowing a few facts before you go.

Mount Vesuvius is a huge 1277 metres high and lies in Southern Italy, about 9 kilometres from the old city of Naples. Before the year 79, there hadn’t been an eruption for 1,800 years and the scene was set for a deadly one. There would have been warning signs like earthquakes and dried up water sources, but the people of Pompeii were unaware that the great peak on the shore was even a volcano, or what that would mean for them. 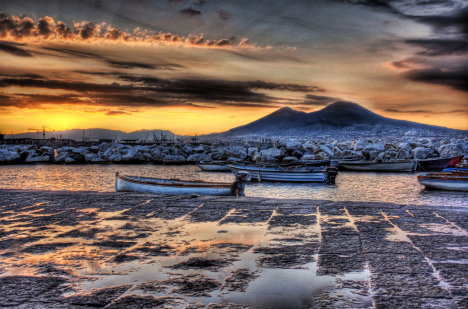 When it happened, Vesuvius erupted, not with lava, but with very hot magma, gas and ash, which then cooled as pumice rock when it rained back down to the ground. This is known as a Plinian eruption and is the most kind dangerous of all. It lasted just over 24 hours and buried Pompeii and nearby seaside town Herculaneum, preserving them for 1,669 years, when they were re-discovered in 1748.

This has meant that historians could get a real idea of what life was like in Roman Pompeii. Mosaics still line the villa walls, the streets are still cobbled over and the drainage system that served the commercial buildings and bathhouses can still be admired today. All signs indicate that many residents here were well-off and lived comfortably. Plaster casts show the impressions where their bodies and those of their pet animals fell when the ash-cloud hit and are a moving exhibit of living history. 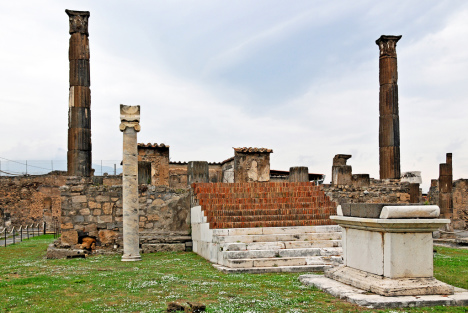 In March 1944, Allied soldiers recently arrived in Italy were witnesses to the last eruption of Mount Vesuvius. American troops at the Pompeii airfield saw the region coated with volcanic ash 2 feet deep and huge rocks fall to the ground. Some 88 military airplanes were destroyed, along with tents and equipment.

The nearby church of the Santuario was built in 1876, so is practically modern in Pompeii terms. Still a popular pilgrimage site for the shrine of Madonna del Rosario, it’s also worth coming for the sweeping panorama from the bell tower, 80 metres into the air. After you’ve seen the town and its history at ground level, the views over the wider area lend an altogether different perspective.

Today, the paintings, pottery, coins and even a well-preserved brothel all still serve as valuable keys to the Roman way of life, for both archaeologists and tourists alike. Pompeii is often referred to as ‘The Forgotten City’. But as one of Italy’s major draws, with millions of visitors each year, the town that was drowned by the mountain remains anything but forgotten.