Assisi – one of the most important pilgrimage sites in Italy

Assisi is a town located in the central Italian region of Umbria and one of the most important pilgrimage sites in the country. It is linked with the life and spiritual heritage of St. Francis, who lived here from 1181 to 1226. The town is considered a historical treasure of Italy. The town stretches along one side of Monte Subasio. A typical feature of Assisi are picturesque houses decorated with pink geraniums, narrow winding streets, small squares with fountains, a number of churches and other monuments from pre-Christian times. Visitors to Assisi can enjoy tranquility, comfort and cleanliness. 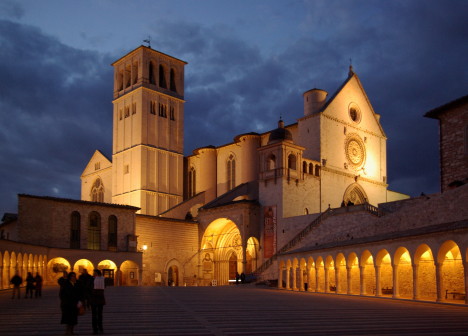 The dominant feature of the town is the Basilica di San Francesco, where are the remains of famous St. Francis, who was an Italian monk, poet and founder of the mendicant Franciscan order. Originally came from a wealthy merchant family, but in adulthood he decided to help the poor, donned therefore poor Franciscan garb and began to preach about humility and love for God. Never, however, did not become a priest and has not held official office. Yet he was one of the most influential religious figures of the Middle Ages. The Franciscan Order is today considered one of the most Catholic congregations in Europe. 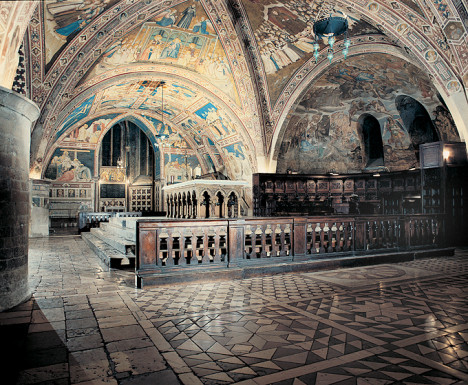 Photo: Basilica di San Francesco
Also thanks to the legacy of St. Francis began in medieval Assisi with the construction of temples that still adorns its ancient streets and squares. St.. Francis is just the icing on the cake. It dates from the 13th century and was built on the western edge of the city, at a place called “hell hill”, it is here that were executed by the worst criminals. After building the temple was the place was renamed “hill paradise” and there were the remains of the saint. In 1997, the basilica was damaged during the massive earthquake, collapsed the upper part of the church, died four people and damaged several important frescoes. 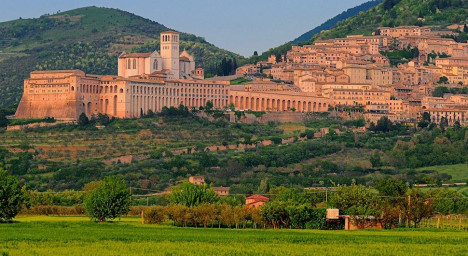 The basilica was reconstructed then, fortunately, the frescoes were restored and everything was put into the original state. Nowadays, visitors can in high Gothic upper church to admire a cycle of frescoes, on which are depicted scenes from the life of St. Francis. This cycle is the work of Italian painter and architect Giotto di Bondoneho. Upper-nave church of the Franciscan influence other churches for many years.

Other Giotto frescoes adorn the walls of the lower church, which resembles crypt. You can view the frescoes sienských by leading artists such as Simon Martini and Pietro Lorenzetti. The lower church is stored tomb of St. Francis, who died in 1226 and two years later he was canonized. Since they were the relics of saints in the Middle Ages priceless, was Francis buried in a secret place, that his body could not be discovered and stolen. Because his tomb was found only in 1818, after two months of intensive digging.

The basilica, which is registered in the UNESCO World Heritage Site, is not the only historical monument of the city. In the city center you will find Piazza del Comune, where in the past most likely became the Roman Forum. During archaeological excavations there were found numerous fact remains from the Roman era. The square is dominated Tempio di Minerva of 1 century, of which fragments are preserved Roman temple with six columns. In the square you can visit the Museo e Foro Romano, where exhibits from the Roman ruins found under the square. Another landmark is the Torre del Popolo of 13 century, in which is located the main bell Assisi.

In the city center there is also a picture gallery Pinacoteca, which cherishes a collection of Umbrian medieval and Renaissance paintings. An important monument of Assisi is also Romanesque church of San Pietro of 13 century, or Oretorio dei Pellegrini of 15 century. As in the Middle Ages, you will feel a stroll quaint old streets or Ancaiani Via Via San Francesco.

Following the example of St. Francis to Poverty promised his peers, St. Clare of Assisi, who founded a female branch of order – Poor Clares. Her remains are kept in the Basilica di Santa Chiara. North of the Cathedral Basilica stands in 1140 with fascinating Romanesque facade. At the very edge of Assisi are visible remains of the castle Rocca magiore from whose ramparts and a superb view of the city and surrounding countryside.
About 3 km from the city center is located Franciscan monastery Eremo delle Carceri with a fascinating interior. Visitors can even see the cell in which it resided St. Francis. For pilgrims is also important church of Santa Maria degli Angeli, which was allegedly built on the site where St. Francis died. The surroundings are available to tourists nice and easy hiking trails. 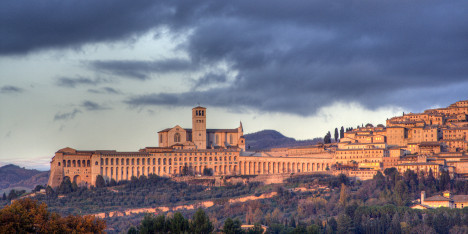