Bergamo is located almost in the middle of the northern Italian region of Lombardy, where it is surrounded by seven hills. It is a picturesque city situated on the hill as well.

The first historical mention comes from the 6th century BC, when the area was occupied by the Etruscans who built walls around the city. 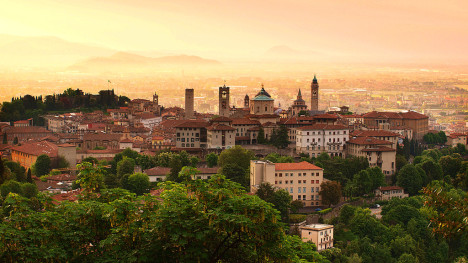 The city is divided into two distinct parts. Lower part – modern part called Bergamo Bassa was built on the Lombard plain at the confluence of the rivers of Brembo and Serio.

Upper part – the older part of the city called Bergamo Alta is a unique group of medieval and Renaissance buildings built on the hilltop, situated at the foot of the Bergamo Alps (also called the Orobie Alps). In the lower part there are the best art galleries, while the upper part, consisting of towers and walls, is a collection of great medieval buildings.

The majestic position of the upper town – Bergamo Alta – attracted Ligurian settlers as early as 1200 BC. Later on, it was the Celts who settled here and gave the city its name – Bergheim or Berghem (city on the hill). In the Middle Ages Bergamo was a City State, later came under the rule of the Milanese Visconti and eventually ended up in the hands of Venice. Even the leader of the mercenary Bartolomeo Colleoni was born here, however he spent most of his life in Venice.

What to see in Bergamo Alta

The old center of Bergamo Alta is made ​​up of a unique group of medieval and Renaissance buildings. Here you will find Piazza Vecchia, which is one of the most beautiful architectural jewels in the county. Part of it is also the Palazzo della Ragione from 1199, which is one of the oldest city palaces in Italy.

You can take a lift to get on the Torre Civica built in the 12th century, which offers a beautiful view of the city. The tower is equipped with a beautiful clock and bell ringing every night at 22:00 to say you buona notte. 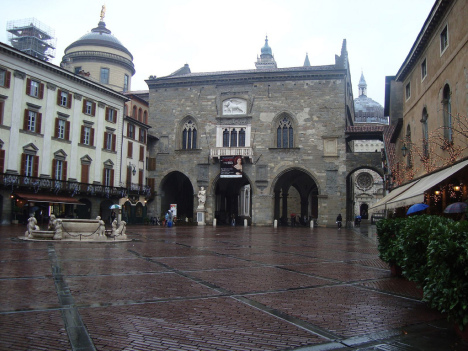 Adjacent Piazza del Duomo is dominated by the beautifully decorated Cappella Colleoni, a church and mausoleum which was built between 1470 and 1476 by the famous political leader Bartolomeo Colleoni. The chapel was designed by the architect Giovanni Antonio Amadeo, who have significantly contributed also to the construction of extravagant monastery Certosa di Pavia in Milan.

Nearby you can see the Baptistery from 1340 and Basilica di Santa Maria Maggiore from 12th century. It is a wonderful example of Lombard Romanesque architecture. Furthermore, in the upper town, you can see the Biblioteca Civica of the late 16th century. 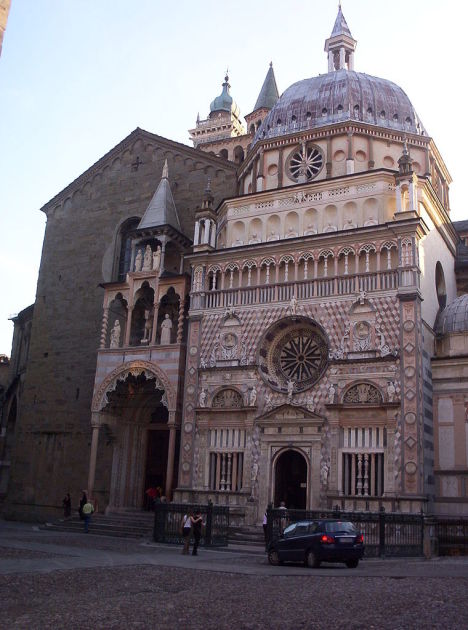 From the square you can go north to the ruins of La Rocca di Bergamo fortress, offering panoramic views of the city. You can continue further to the north through Via Porta Dipinta and visit the church of San Michele al Pozzo Bianco, hiding medieval frescoes. South of the square, you can take the cable car up to the Castello, from where there is an additional superb views of the city and surrounding countryside.

The lower part, Bergamo Bassa, is actually the medieval town, where are located the best art galleries of the area. The greatest pride of this lower part are palaces on Via Pignolo. Nearby there are the three churches Santo Spirito, San Bernardino and Sant’Alessandro.

The icing on the cake on a tour of the area will certainly be Galleria dell’Accademia Carrara, a distinguished art gallery with a nice collection of works made by Venetian masters and local artists, mainly from the 15th century. 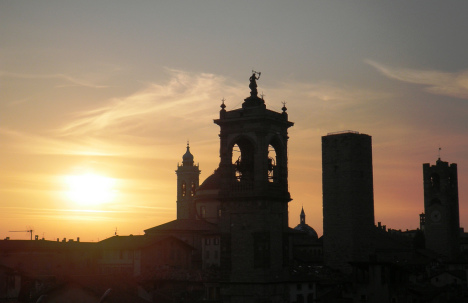 In these days, Bergamo is mistakenly considered by many to be just a transfer city, as there is a busy airport, used by millions of people every year just for arrivals to Milan, or for changing the airplanes flying to other destinations within Italy, or Europe.

Bergamo is a very nice city that should not be overlooked and if you make your way through Bergamo airport, try to stay here for at least few hours and take your time for exploring this amazing Lombardian city.