Italian Tourism in Sicily is an Adventure You Create

On a recent fall trip to Sicily, my wife and I began our adventure in Catania. At the car rental office we asked the clerk to recommend a few hotels. The clerk graciously offered to call some hotels for us. She was successful and secured a room for us on the first call. When we arrived at the hotel, it was more of a bed and breakfast and our second floor room was actually a suite with a bedroom complete with a canopy bed; a sitting area, with lots of embroidered pillows, that opened onto a small standing-room-only balcony; a compact work area wired for electrical appliance and even a small icebox under one table; and an in-suite bathroom with a small shower, sink, and both male and female toilets. All this comfort cost 50 Euros a night and included a Continental breakfast served in the large dining area on the first floor. We were signed into our suite and ready to start our new adventure by one PM local time. 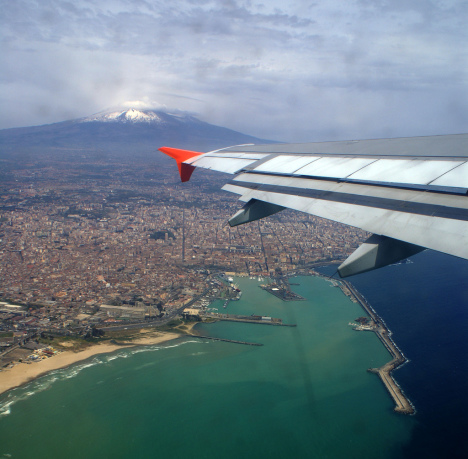 One thing I have learned from prior trips to Italy is that “when in Rome, do as the Romans do,” really does apply when it comes to eating. Unless you are in a heavily traveled tourist location, the majority of restaurants and cafes are closed at the precise times that most Americans would be using them. One PM was right in the middle of one of those closed periods.

With Mt. Etna a thirty minutes’ drive away and where just about every store would be open, the volcano became the first site on our wish list to be visited. We drove East on the main boulevard, via Etnea, which is a direct route to Mt. Etna. The closer we got to Mt. Etna, the cooler it became. Throughout the drive there, the vista out the right side of the vehicle was dominated with the volcano’s majestic presence. Smoke puffs continuously drifted out of its crater even though twenty percent of the upper exterior is covered with snow.

True to its tourist designation, all the cafes, restaurants, shops, stores and ticket offices were open and eager for business. Even though my wife speaks Italian, the majority of the trades-people wanted to communicate in English. That was a bonus for me.

We enjoyed a late lunch at La Pizzeria d ‘Etna, where I don’t recommend the pizza but do encourage the buffet table. There is a one price cost for either the buffet or a pizza. Sodas are served au natural, generally at room temperature. Ice is provided upon request and it comes in a soup bowl with a spoon for serving.

Now, warm and clearly “tourist” labeled, we walked around the various shops and tour offices. The cost of a cable car ride up to the volcano’s mouth was about $75 each. We passed and bought a few elegant postcards featuring a top down view of the smouldering crater for $3 total. 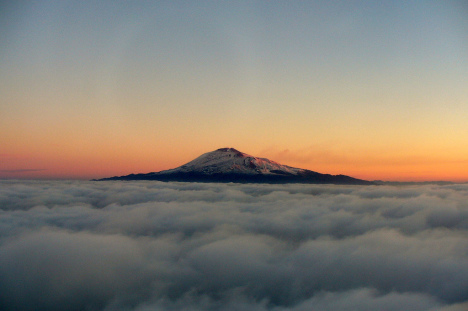 Etna above the clouds, Sicily, Italy by Leandro Neumann Ciuffo

The sun had all but disappeared when we decided to return to Catania. Our timing could not have been more perfect with the skyline, on the left side of the car, lit up with sporadic bursts of lava sparks. The afternoon’s puffs of smoke were now dancing brazenly across the volcano’s cap. Knowing that eateries would be closed when we next wanted to eat, we made a stop at a service station with a fast food version of an eatery. We bought sandwiches, sodas and some pastries to take back to our room.

Back in our suite, we both agreed that our first day in Sicily was a total success and that what we now needed was some sleep. Our tentative thought for tomorrow was to visit Catania’s renowned Piazza Duomo where, according to local lore, there is a statue of an elephant that represents a challenge to the manhood of all Sicilian men.