Today the town of Monreale has around 25,000 inhabitants. Due to its proximity to the Sicilian capital, Monreale almost became one of busy Palermo’s suburbs. However, once you visit this part of the island, I’m sure you will not regret if you pay a visit to the local cathedral, which, with its mosaics, is one of the greatest treasures of this Italian island, often displayed on majority Sicilian postcards. 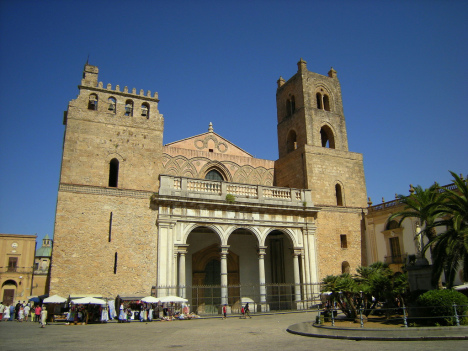 Cathedral of Monreale is a great example of Arab, Norman and Byzantine art and architecture. Its construction began in 1172 on the initiative of King William II., known also as The Good, who wanted to use it for his own tomb after his death. Therefore, the court architects did their best to make this church the most beautiful one and overcome the beauty of other royal temples. Not only the building itself, but also the decoration was influenced by French, Islamic and Byzantine patterns. 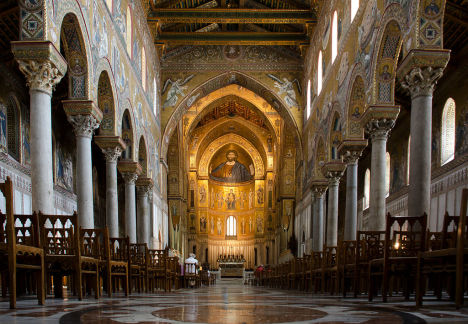 The cathedral is a massive three-aisled building, 102 meters long. From the outside, however, appears to be quite modest, west facade is plain with the exception of portal and decorated gate. In addition the cathedral is partially covered with the urban buildings and adjoining monastery.

The beautiful portal boats a bronze door from 1186, which are decorated with 42 biblical scenes. Here you can see the features of lion and griffin, which were symbols of Norman royal family. On the left side of the church you can see another bronze door from the year of 1179, which is mainly influenced by Byzantine art. But the main attraction is not the cathedral as seen from outside, but its interior.

Marble floors are made up of a mosaic pattern and decorate the whole interior of the church on an area of 5950 square meters. The walls are covered by the unique giant mosaic mainly in gold color. There is a huge number of various biblical stories and characters, creating the cycle, which was completed in 1182 by Greek, Byzantine and Sicilian artisans.

The nave and wooden ceiling is supported by the pillars, which were moved here from the old ancient buildings. In the apse you can see the great Christ Pantocrator, which means Christ as Sustainer of the World. The royal tombs of kings William I. and II. are located in the chapel. Then there is also saved a precious relic – the heart of the French king Louis IX. 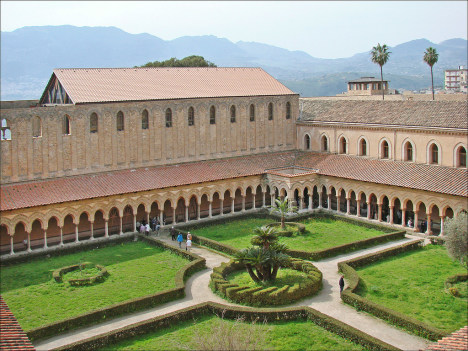 Adjacent to Monreale Cathedral, you will find a monastery, which was built at the same time, and is considered the second major sight of Monreale, hiding a Norman monastic cloister. A court is featured with a total of 228 pairs of columns of colored marble. On the columns are displayed different scenes from the Bible or from the lives of some important religious figures. The entire corridor preserved in its original condition, and it is therefore one of the very rarest sights of Sicilian statuary. If you want to enjoy some of the beautiful views of the city, then look for a place called Belvedere, which is located next to the monastery.

So if you are interested in Sicilian art and history, do not forget to put a town of Monreale into your itinerary as this is the site that you simply must see.