Fénis Castle is an impressive medieval structure located in the Aosta Valley region of Italy. It is a hugely popular tourism attraction for Italians as well as foreign visitors from around the world. It is so popular primarily because of the classic castle layout and the impressive size of the structure.

Its location at the top of a hill and tall towers that extend into the sky make it look as it were straight from the pages of a fairy tale. To plan an exciting trip to Fénis Castle and the surrounding areas, use this guide to learn more about the history of the area, other nearby attractions in Aosta Valley and the best accommodation options for travellers. 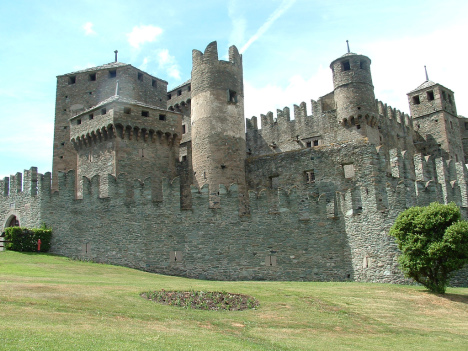 A view of Fénis Castle / Photo licensed under the Creative Commons, created by Matteo Bruni

In 1242 Fénis Castle was first mentioned in a written document. It was owned by the Challant family but at that time was merely a walled enclosure and could not truly be called a castle. During much of the 14th century, significant construction work created the castle that you can see today. The construction was overseen by Aymon of Challant as well as his eldest son Boniface I.

Although throughout the 15th century the castle flourished, it began to fall into disrepair as the Challant family’s wealth began to deteriorate. In the 18th century it was sold to Count Baldassarre Castellar of Saluzzo Paesana in order to pay off money owed by the Challants.

Architects at the beginning of the 20th century purchased the castle and began to restore it as well as adding in wooden furniture from the medieval period. Today the castle is owned by the Regional Council and is used primarily as a tourism attraction and a historical landmark.

Most visitors who come to the Fénis Castle arrive by car and park in the free parking lots surrounding the castle. However, there are buses available to and from the city of Aosta that charge €2 for a single trip to the castle.

The castle is open to visitors throughout the year, although the hours are limited between the months of October and March. During the summer, the opening hours are between nine in the morning and half past six at night. Adults should expect to pay €5 for admission while children and seniors pay €3 apiece. 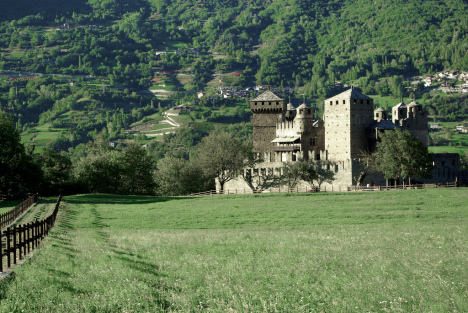 Fénis Castle and its surrounding countryside / Photo licensed under the Creative Commons, created by stefano Merli

There is no doubt that the castle is the main attraction in Fénis. However, there are also a number of ways to spend your time exploring the town and the nearby city of Aosta. Dining enthusiasts will love the blend of French and Italian cuisines available in the upscale restaurants as well as in the casual street cafes.

In the city of Aosta, there are extensive Roman ruins that are free to tour. Skiing and snowboarding enthusiasts will appreciate that Mont Blanc is just minutes away and provides a wonderful place for winter recreation. There are plenty of shopping opportunities for those looking to pick up a few souvenirs of their stay in Italy, with leather goods being especially popular and a great value.

There are no accommodations within walking distance of Fénis Castle. However, a short bus trip or car ride into the town of Fénis will get you to a few small local guesthouses and inns.

You might also choose to rent private Italian apartments e.g. at http://www.holiday-rentals.co.uk/Italy/r39.htm in order to get an authentic feel for the local culture.

Large and spacious private villas are located throughout the Aosta Valley for those less concerned with budget. Expect to find luxurious villas that feature scenic views of the valley as well as outdoor swimming pools for guests.