Barano is the second largest city of the island of Ischia, located on the southern coast, adjacent to the eastern part of the mountainous Serra Fontana, which is composed primarily of agricultural land. The town lies at an altitude of 212 meters and is surrounded by fields of vines. The city itself is divided into several smaller parts, such as Buonapane, Piedimonte and more.

Among the biggest attractions of the area around Barano include Maronti beach, which has a gradual slope into the sea, so it is popular among families with children and less proficient swimmers. Maronti is considered the most beautiful beach on the Ischia. There are thermal baths “Aphrodite Gardens” with the springs that can help those having skin and digestive problems. 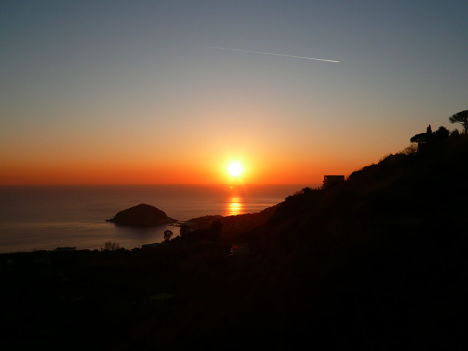 An interesting feature is the so-called Fumaroli – the thermal springs rising from the sand. Nearby Barano there are also other medicinal springs Nitrodi, and it is said that they have miraculous effects. This area was popular already among the ancient Romans thanks to its warm springs. It is also said that the water from these springs also acts as a mild aphrodisiac.

While you are in Baran you can enjoy local traditions, customs and culture that is passed down from generation to generation. Locals keep alive such a unique and old dance called “Ndrezzata”. It is a folk dance characterized by using of wooden sticks and is known since the time when Barano was a frequent target of attacks by pirates.

Among the most important buildings you can find the Torre Saracena, The Pilastri aqueduct (from 1470), Church of St. John the Baptist from the 15th century.

If you set out to explore the island, go through the village of Testaccio to Lido di Maronti, where you can enjoy swimming in the 70 meter wide beach, which is surrounded by the peaks of Punta delle Fumarole and Punta Signora. Do not forget to visit the cave Cavascura.