Located in the Belluno Province in the northeastern part of Italy, one can find the magnificent Dolomites. This mountain range is part of the larger Limestone Alps. The Dolomites extend from the Pieve di Cadore to the Adige River and includes the provinces of Trentino, South Tyrol as well as Belluno. The entire mountain range has been declared a World Heritage Site by UNESCO back in 2009.

The mountain range received its name from the mineralogist who described the type of rock that the mountain range was composed of. While they have been referred to by many names such as the Pale Mountains, it was Déodat Gratet de Dolomieu of France who named the mountain officially back in the early part of the 19th century. 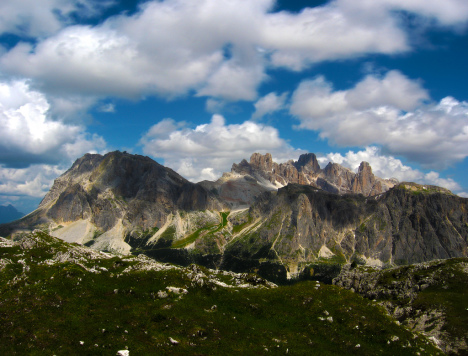 In the Province of Belluno, in Veneto region, one can find the Dolomiti Bellunesi National Park. There are a number of regional parks that can be found all throughout the Dolomites. There is also much history to the mountains.

It was back in the First World War that the Dolomites were considered to be the boundary line between the Italians and the Austro-Hungarian military. The Dolomiti Bellunesi is now home to the Cinque Torri or Five Towers that were built back during the war days. This particular site is now a museum and anyone can visit the towers.

A number of paths were cut into the mountains during the war. These protective paths which are known locally as vie ferrate take hikers to various points of interest in the mountain range. There are eight paths in all and each one is numbered. Since it can take someone more than a week to walk the distance from one end to the next, a number of huts known as Rifugi, have been cut into the rocks along the way.

Every year, hikers from all over the world make their way to the Dolomiti Bellunesi to take their chances along the vie ferrate paths. Not everyone has the endurance necessary to make it all the way from one end to the next, but it is definitely worth the effort to try. The most commonly selected path through the Dolomites is known as the Alta Vista 1 which takes you up to some of the most awe-inspiring views of the surrounding countryside.