One of the inherent symbols of the Italian city of Venice is definitely its gondolas – long flat-bottomed rowing boats that move across the calm waters of the local channels. The tradition of the gondolas dates back to the 15th century, but their origin is shrouded in mystery.

First gondolas were produced in large docks where otherwise large naval and merchant vessels were mainly prepared. Experts say that the history of these boats dates back to 697, but the first written mention dates from 1094, when the word “gondola” appeared in the shipping regulations on the lagoon. 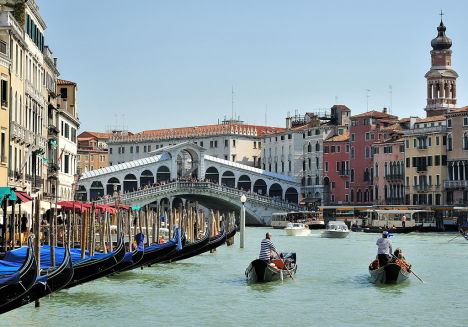 But how these boats came to its name? Well, it is not clear. Some people say that the word is of the Maltese or Turkish origin, others think that the name is clearly Greek. The wildest theory is that it was a boat used by Charon to carry the deceased away to the underworld. Therefore these boats which are very romantic for someone, can be horrible for others. And not only because of its black colour that can resemble floating coffins.

The development of gondolas has been gradual. Originally they were created to ferry people and goods along the shallow waters of Venice. In the 13th century the boat had 12 oars, in the 15th century has been getting smaller. And later they began to have the shape of the gondolas we know today.

The owners started to decorate them in all kinds of ways, and even competed in having a nicer boat. However in 1562 a new Act has been approved, which prohibited any decorations. Since then the gondolas are only in black, austere, and are permitted to have only three trims. 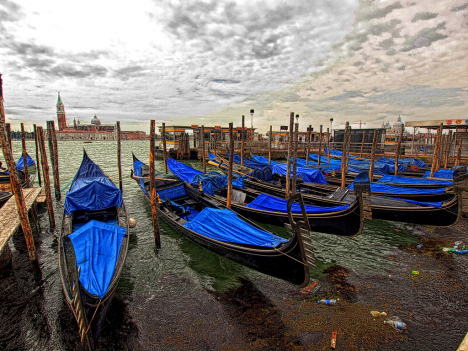 Today Venice visitors can see the gondolas along the port of Squero – San Trovaso, where the gondolas are not only anchored, but also produced. Old gondolas are usually repaired and only few of new ones are produced per year. In the 18th century there were several thousands of gondolas sailing through Venetian canals but today there are just few hundreds of them. Most of them are no longer used as the main means of transport, but only as a tourist attraction.

Producing a gondola is not that easy, each weighs around 700 kg, consists of 280 parts, and is made of 8 different types of wood – lime, larch, oak, fir, cherry, mahogany, walnut and elm. The average length of the ship is 11 meters. Despite all of these dimensions gondola can easily be mastered by one person. Experienced gondolier can do eight different manoeuvres with an oar. 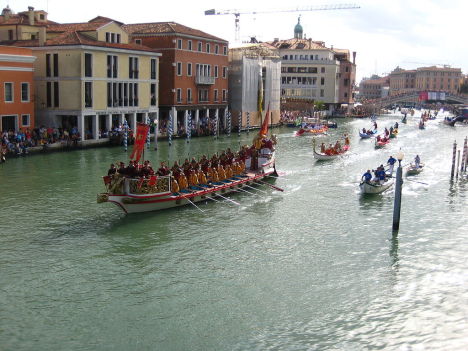 The most gondolas and other boats can be seen on Canal Grande, which is 4 km in length and is main artery of the city. It is also the place of annual celebrations called Regata Storica di Venezia. During that time you can see lots of beautiful historic gondolas decorated with flowers and flags. The next celebration is planned for Sunday 1st September 2013.

Cruise on the gondola is now relatively expensive, so it is mainly used by tourists. Prices are always quoted per gondola, not per person and one boat can accommodate up to five people.