Italian festivals and events in August

For the month of August, you will find several smaller or bigger events in Italy. Sagra or festa is usually celebrated every weekend in the month of August. Streets of Italy are filled with posters that are brightly colored. Tourists and locals can taste the sample of Italy’s inexpensive local foods.

Most Italians spend their holiday vacation just in time for the festivities in August, where often celebrate it on the seaside. The locals who dressed themselves in medieval costumes usually amaze tourists. And there are also musical performances that are regularly performed in the streets of Italian cities, towns or villages every month of August.

Assumption Day is a national feast day for Ferragosto. Almost all shops and businesses will be closed on this day. You will be able to find many celebrations and events all over Italy before, on the day and after the Assumption Day.

Celebrations may include fireworks, music, dance on the streets and food. However, in big cities like Milan and Rome, it is most likely to be emptied by people for most of them leave the city to celebrate the holiday in mountains and beaches. 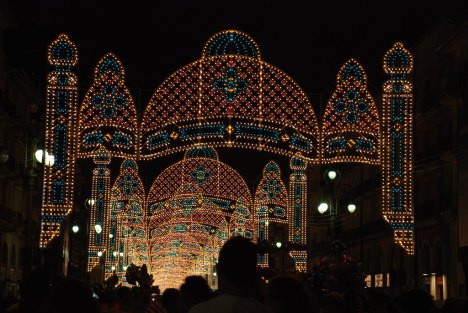 Besides the Assumption Day, here is a list of festivities in Italy for the month of August:

Veneto Region celebrates a medieval feast every first weekend of August with an archery competition, tug of war, relay race, horse race and lots of parade. Palio di Feltre, also known as Palio dei Quindici Ducati, is held in the town of Feltre. 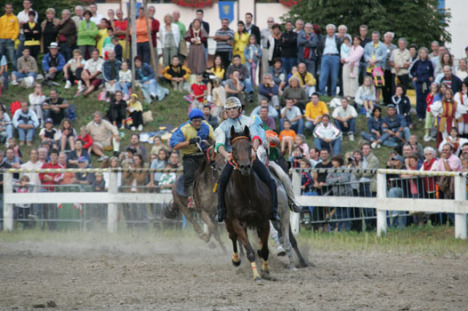 Every first Sunday of August, the Le Marche region celebrates a historic sparring tournament. This tournament, which is one of the most visited celebrations in Marche, is usually introduced by a large parade wherein locals and tourists alike are all dressed in costumes with fifteenth century theme.

This is a festival that you must not miss when visiting Rome during the month of August. The feast will re-enact the miracles that took place at the Basilica of Santa Maggiore, which is one of the influential churches and the most dedicated church to Virgin Mary.

The story of its miracle is very evocative and fascinating. With the most magnificent scenic of fake snow under the summer night, sky of Rome. With the light and sound show, which is shown in the opposite square across the Basilica, will definitely catch the heart of any tourist and even locals. 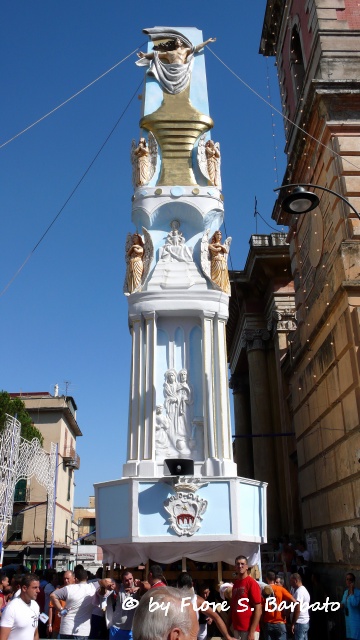 Every first Sunday of August, a rowing tournament is held between the thirteen maritime villages within the border of the Bay of La Spezia. 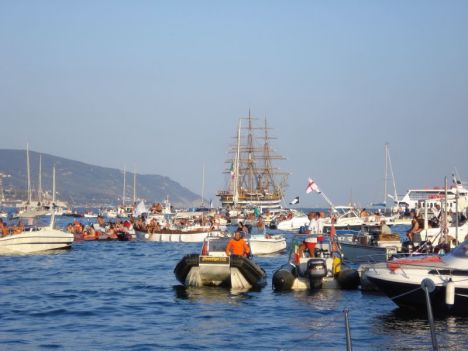 This feast of Giostra di Simone is held every Sunday that is nearest to August 5. There will be a great costumed parade with the locals; after that, there will be a competition of knights portraying the four neighborhoods or contrade towns. 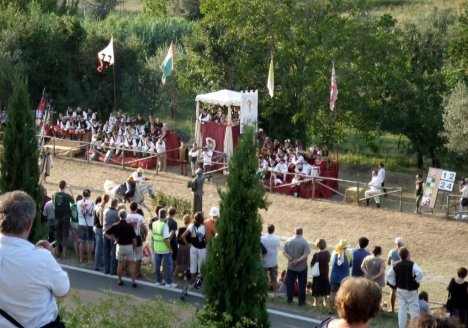 Celebrated in Capalle sul Tavo near Pescara, a huge parade held at night with large statues and ends with various types of fireworks.

Held every August 15 in Liguria, sea of various firework displays are expected to fill the sky on this day.

A village in Abruzzo region, which is very famous for making ceramics, commemorates their ceramic arts by tossing their defective arts from a high place, breaking it in a dramaturgical way. 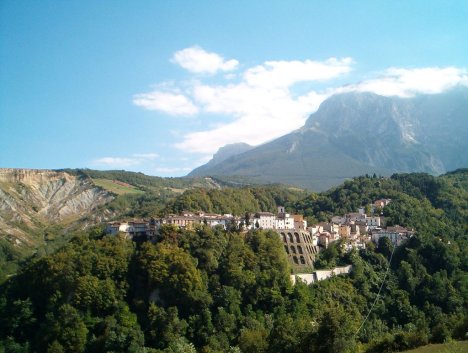 This is the feast of candle held in Sassari, Sardinia. This is a very exciting and interesting event, which was inspired by the 16th century. You will see teams that races with each other. Teams are composed of men carrying very heavy and huge candles. 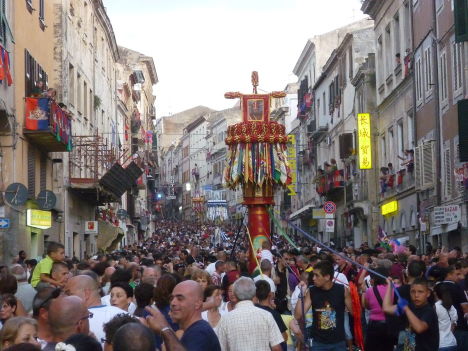 The winner of the race gets the chance to win the silk “Palio” – is a cloth or banner admired by the winner of a race or any competition. The village of Siena usually gets crowded in this time of the year, so if you have plans to visit Italy during the Palio of Siena, better plan ahead. 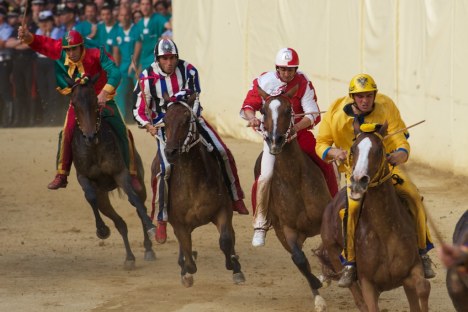 The Miracle of the White Madonna – August 17

The Miracle of the White Madonna is celebrated with a procession full of torchlight circling around the Ligurian seaside village of Portovenere.

This “Escape of the Ox” festival is a three-week celebration in the village of Monte Falco in Tuscany. The feast includes music, processions of locals dressed in historic costumes, drinks, foods and tournaments between the four quarters of Monte Falco.

This feast is also called “The Pope’s Pardon,” which is honored every August 28 to 29 of every year. This is held at L’Aquila, which is the capital of Abruzzo region. The feast has two-day processions with locals dressed in historic costumes. 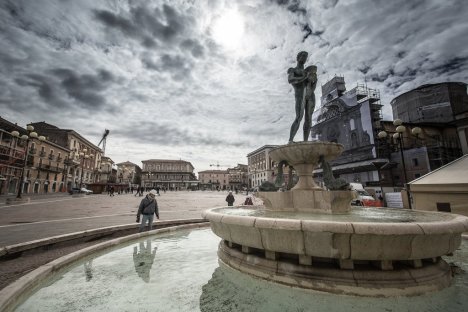 This festival takes place from the third to the fourth Sunday of every August. It is celebrated in a historic town by the name of Città della Pieve located in the Province of Perugia, the region of Umbria. It is a show of people re-enacting Italian competitions held during the 1400s.

You will be interested and fascinated by the sorts of competitions that were held back then. The people also get to enjoy Italian dishes prepared in a manner as they would in during the 1400s. There are also shows of medieval costumes that will really wow you. 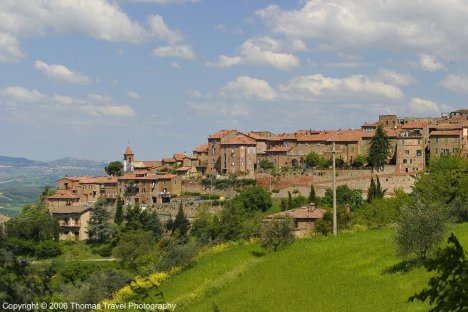 During the month of August, Italy is filled with music. You will be able to locate music performances outdoor in different towns and cities around Italy, which is usually held at the town’s central Piazza. Here is the list of some of the largest performing arts and music feasts held every August in Italy.

Estate Romana (Roman Summer) is a feast of performing arts and music during summer season in Rome. The event stages major theater, music and events in the middle of a big city.

Estate Firenze has the whole summer of Florence to perform their performances.

The Arena di Verona organizes the Verona Opera Season, which is known to have the most beautiful opera house. You may combine all the opera house in the whole world but the Verona opera house has a combination of unique settings with upcoming performances and production with a high standard consistently. 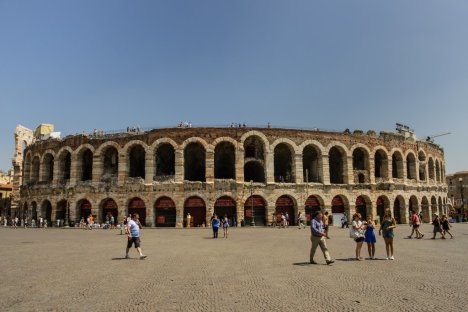 This is a jazz and classical music festival held in Stresa on Lago Maggiore, which starts every last week of July and last for the whole month of August up to the first weeks in September.