The beautiful and bustling Jesolo stands on the narrow strip of coastline between the lagoon of Venice and the mouth of the Piave in the region of Veneto. Its harbor is considered the most vital of the Venetian province and in addition to the beaches, the city offers a myriad of opportunities for recreation and daytime notturno.Jesolo, stabilimentiStoria
Already it is known in the sixth century AD, when some populations survived the barbarian invasions from the north took refuge on the island of Equilio, the first settlement was built in this swampy area in the fifteenth century under the name of Cavazzucherina. Only in the twenties of the ‘900 the “Great Land Reclamation” allowed a first tourist development of the coast and the first factories were built, the first hotels and restaurants early. In 1927, in the central part of the coast he rose the Lido di Treviso.
In 1930 it was renamed Cavazuccherina As Jesolo and Lido di Treviso was called Lido di Jesolo. The city experienced an intense growth in the postwar period linked to the tourism industry, becoming one of the most important tourist centers.

What to see
In addition to many natural beauties, Jesolo also offers a lot in terms of culture.
In the area of ​​Pineta from Ancient Walls, a vast archaeological area of ​​about 36,000 square meters with exhibits of the early Christian era. Many of these finds are kept at the Sala Tiepolo APT Jesolo in a permanent exhibition. To visit in the city then there is also the Civic Museum of Natural History with well about 15000 exhibits. 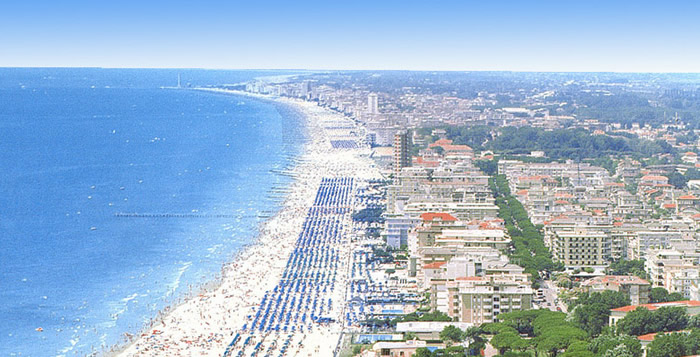 What to do
In Jesolo vacation is relaxation assured but also fun. In fact the city seems built specifically for each and everyone, even the most demanding tourist.
Fifteen kilometers of beaches, many with animation; parties in the beaches until late at night; a large pedestrian area – considered one of the biggest in Europe-, with shops, restaurants, bars and clubs.
For sport lovers, the city offers many facilities ranging from water parks, pools, tennis, soccer and volleyball, not forgetting the beautiful golf courses of the Veneto.
Nature lovers can instead devote themselves to long walks, riding or cycling in the green and peaceful pine forests.

Nearby
Jesolo is a great place to start to make real organized excursions to the lagoon area. And among the most close and interesting, in addition to the beautiful valleys of the Lagoon of Venice, there are Eraclea and Caorle.
Eraclea, of ancient origin, it has a beautiful beach, also known as “Green Pearl of the Adriatic”, 3 km long and surrounded by dunes and pine forests untouched. Feature also known as Laguna del Mort, a sea, a strip of land that separates from the rest of the Adriatic Sea.
Caorle is home to the tourist port of Santa Margherita, and the old town is like a small village, with “streets” (narrow alleys) and “campielli” (squares), along with pretty pastel colored houses. The beautiful city has hosted and inspired the famous writer Ernest Hemingway.

My location
Get Directions
If you are planning your next trip to Italy book hotels, flights, rental cars at best price guaranteed!
Leave a comment eraclea, jesolo, lido