One of the most scenically beautiful in Valpolicella, the valley of Marano strikes visitors for its amenities. A series of hillocks characterizes, in fact, the environment, shaped into gentle slopes, on which rises, but also round, the bulk of Mount Castelon, witnessed intense volcanic activity that had to affect the valley Secondary end of the era and the first half of the Tertiary. Extensive landscaping and sweet, then, stretching over the plain below. 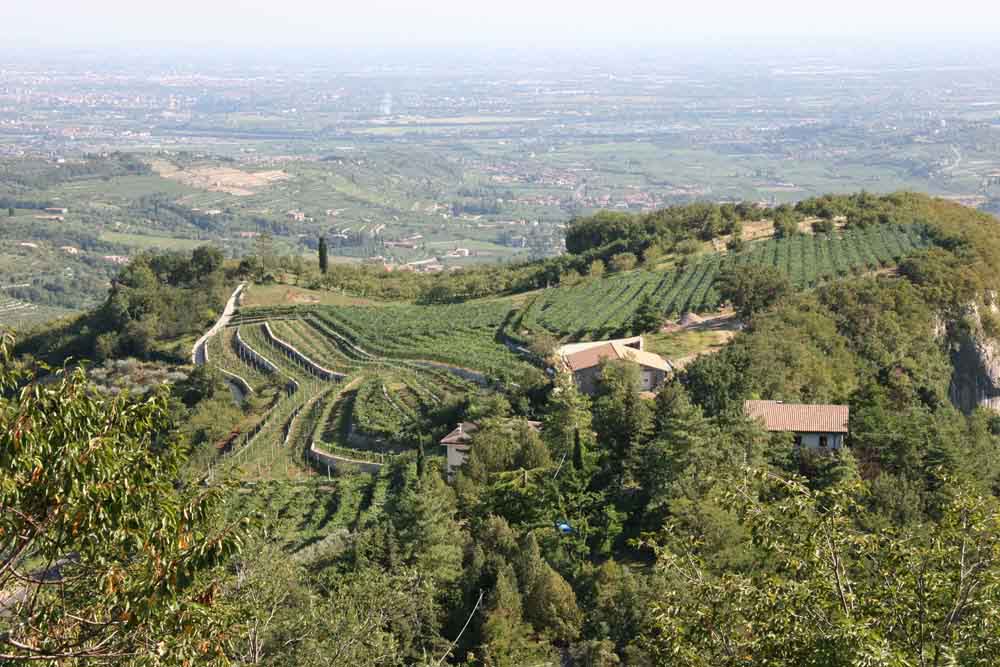 The Marano di Valpolicella deals with its territory across this valley which is between that of Progno Fumane and that of Progno Negrar. It is a valley, situated in the heart of Valpolicella, open wide at noon where they are planted vineyards and cherry trees, but riddled with some success even olives. Its inhabitants, numbering just under three thousand, are mainly distributed in small villages and scattered houses, as befits a population that, until a few years ago, was mainly devoted to agriculture. Until a few years ago, because now here agriculture is practiced by few, in modern companies that produce the cream of Recioti area and cherries of the most popular around the Veronese, the rest of the population industrious about instead at companies secondary and tertiary, on-site and in the nearby towns of Valpolicella. Modern farms-those survivors – who know how to marry tradition and progress, making sure the product quality before quantity.

There are four settlements on which converge the main districts and individual courts: Marano (with Pezza, Prognol, Purano, Canzago, Cotto and Ravazzol), Mondrago, San Rocco (with Carazzole and Tonei) and Valgatara (with Paverno, Female lamb, Badin, Canova, Fasanara Gnirega, Maregnago, Molino, Well, Torre and Villa). Many of these districts or courts – which were saved from destruction newer buildings – still bear witness to a civilization that had been able to do, even the fact living, something very organic and functional. Is very characteristic for example, above all else, the ancient town of Mondrago, one of the best preserved stone villages of the Dolomites, being located precisely in the highest part of the City, where the Valpolicella discoloring ends up in a mountainous area, already reign forests and pastures, and now economically depressed area, due to the abandonment of traditional activities, resulting in bleeding of the population that, until a few decades ago, v’insisteva relatively large, dedicated especially to the cutting of forests and to ‘livestock. 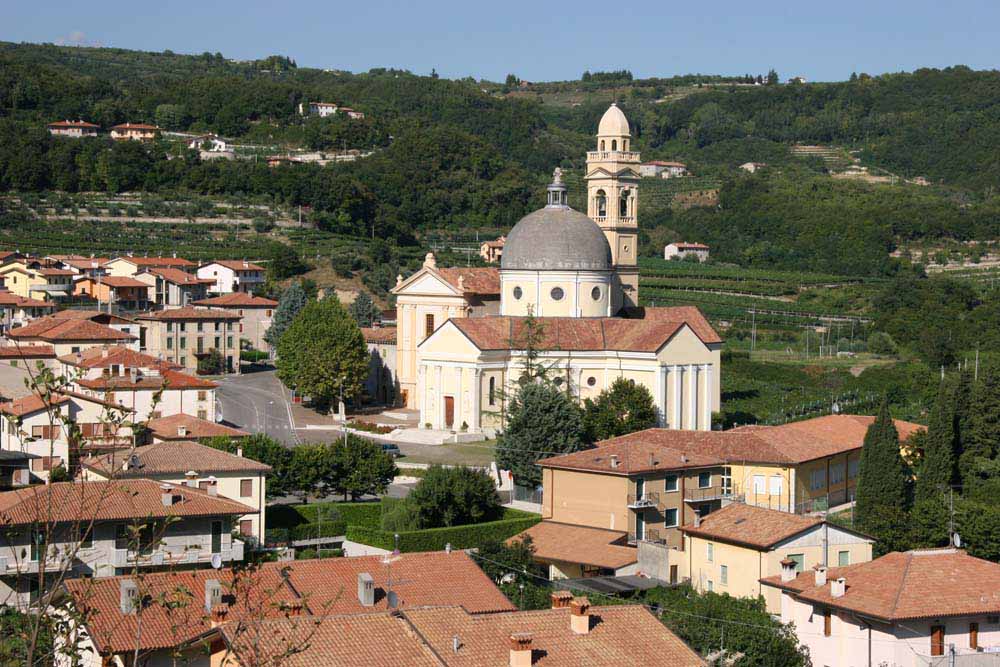 The situation of the past is indeed well described, throughout the City, as a guide than a hundred years ago: “lies the territory of this municipality in the middle part of the district (San Pietro in Cariano) with character throughout mountainous ; … it is well cultivated and fertile: it gives grapes, cereals, mulberry trees, fruit trees, vegetables and potatoes. Local industries are those involving the production of the wine, dairy products and livestock from small backyard. ”

Numerous are, in the territory, the prehistoric remains: Ravazzol, Boschetti, Monte Castelon, San Rocco, Pizzol, Mont To, Castel Besin, Monte Noroni, Mondrago Porcarola and Ciacalda, Covolo of Pani, are all places that have yielded flints, pottery , bone, bronze and other materials now in the Museum of Sant’Anna d’Alfaedo, the Museum of Verona and to the Department of Antiquities of the Venetian. The merit of these findings is mainly to Olindo Falsirol, Raffaello Battaglia Francesco Giorgi, Luciano Salzani, Leone Fasani, who in Valpolicella have continued a tradition of excavations started again in the nineteenth century by Stefano de Stefani.

For example, a test excavation on Mount Castelon Marano has recently put into light a stratigraphic sequence that includes a protoveneto horizon, a horizon of the late Iron Age and medieval horizon. Particularly interesting are the materials of this essay appeared horizon protoveneto presenting typological very elaborate and seem to foreshadow some reasons the real Iron Age. 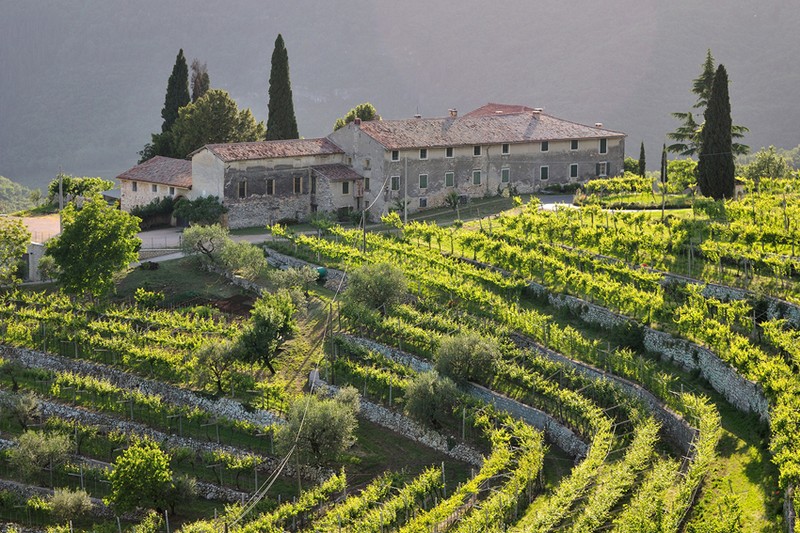 While opening new prospects and problems, the amount of material was not sufficient, however, to determine and specify better the horizon of transition from the Late Bronze Age to the Iron Age. In Roman times, the valley was part of the Pagus of Arusnati that stretched across today’s Valpolicella. Right on Castelon Marano – roughly where now stands the church of Santa Maria Valverde – on the slope of the hill that then San Rocco, a temple dedicated to Minerva, the remains of which appeared in the excavations of 1836 and were still visible in 1929. As can be useful to better localization of the remains, we see what he writes about Olindo Falsirol:

The temple was left of those who got out of the church of Santa Maria, head to San Rocco for the street that runs along the southern side of the mountain and then east. Precisely it stood little versed where now is the coara, often reduced to scavezzaia, which is embarked from when this procession, the feast day of Our Lady, runs around the mountain itself.

Then, as often happens, shot down again in the early medieval age temple to Minerva, it was built in its place, a small shrine to the Virgin Mary that gradually, to change to another, came up to us. The image of Our Lady that is venerated today in the church – which for its scenic location overlooking the entire western Valpolicella – dates back to 1516 and, according to the inscription, he was made to run by the Society of St. Mary of Valverde del Castello di Marano. A major renovation of this shrine is recorded in 1682 as you can even detect in this case by an inscription above the main altar.

During the Scala Marano and its castle were feud to Federico della Scala, Count of Valpolicella. For a conspiracy hatched by Frederick against Cangrande, the count was later banned and the Castle of Marano was shot down never to rise again. Remains of the structures of the manor emerge anyway still near the Castelon and indeed deserve more attention in relation to their highlighted.

Remember Gian Maria Varanini as the Castle of Marano, mentioned for the first time (indirectly) in 1213, was destroyed by the famous earthquake in January 1223. Of the subsequent reconstruction there is no news; However in the second half of the thirteenth century it was in efficiency and – unique among the castles of Valpolicella – permanently guarded by a garrison.

Still Varanini adds that, before 1288, were carried out works unspecified strengthening (“opportunity forteze castri Marani”); and in his will in 1339, then, Federico della Scala remembers “Iaborerium castri mei Marani”, an expression that seems to allude, considered the use of the term “Iaborerium” which is done in low-medieval Verona sources, to an intervention of a certain size, to be dated probably to fifteen years (1311-1325) of the “sovereignty” of Frederick the valley; admission to it of a large stock of wheat, belonging to the communes of Valpolicella; not that the “diruptio” of the same castle (1325, probably).

Since then, you have no more news of its use for military purposes or residential, but in the early decades of the fifteenth century, finally, the castle of Marano is mentioned in a list of “castrates Verone”. In short, his remains should still be recognizable, if in the pastoral visit of Ermolao Barbaro (mid-fifteenth century), the church of Santa Maria di Minerbe is located “in Valleversa sive in castro”.

There are numerous churches scattered in the valley. Going from San Floriano, the first we meet is in Pozzo: dedicated to St. Mark, it reveals its origin in the Romanesque architectural structures and in particular in the bell tower, while the interior is adorned with fourteenth-century frescoes of good quality. In one of its sides he is stuck a vote Roman dedicated to Jupiter that was perhaps, at the time, collected in the vicinity, and that would testify in this case, therefore, the seniority of a pagan shrine in the same place where later arose the Christian chapel .

A Valgatara the parish church, dedicated to Saints Fermo and Rustico, is also of medieval origin: it is parish, dismembered from the Parish of San Floriano, from 24 December 1797. The architecture of the church today is the nineteenth century: it was designed by the architect Francesco Ronzani in 1854, adding two aisles and an apse round a building perhaps century. In 1944, the architect Francesco Banterle, the church was lengthened and increased up to its current dimensions.

Marano, former parish in 1454, had its eighteenth-century church that still, though devoid of furniture and abandoned, you can see next to the new temple built between 1922 and 1924 and designed by Don Giuseppe Trecca. A shape of a Greek cross with a dome almost thirty meters high, it has good decoration of the painter Aldo Tavella performed between 1944 and 1945. From this parish also depend on the churches of St. George in the district Purano (XV century), the San Carlo in Contrada Canzago (seventeenth century) and in the district of Saint Eustace Prognol.

Many, in the municipality, also the villas, two of them in places Canzago, the other six in Valgatara.

Former Villa Lorenzi, Contrada Canzago, is the architect Luigi Trezza. The building is of the late eighteenth century, or the beginning of the nineteenth, and repeats the architectural sanmicheliani.

Even villa Rizzini, already Door, always in the district Canzago, is beautiful and picturesque Medieval town, notable for the façade with windows and doors dented, with elegant outdoor staircase to four flights, balustrade tuff and iron balconies, and the double open gallery rustic that develops on the eastern side, while the west wing extends to the road ending in the simple façade of the Oratory of San Carlo, recently renovated. Surrounded in the past by a large land ownership and a garden with fountains, now disappeared, they remain in this villa the crests of the Committees Door, which gave its name to a nearby district.

Former Villa Graziani, seems to have been built in 1826 and designed by architect Giuseppe Barbieri is beautiful, powerful and balanced construction of classic lines patterns that repeat themselves sanmicheliani.

Villa Campagnola is vast and picturesque building divided into two parts: on the west protruding architrave loggia with arched portico below and rusticated pilasters, type Sanmichelian, and a wing extends forward to form the country, crossed the atrium d ‘solemn entrance door. In the eastern part of the building there is an external staircase with two flights and the emblem of the accounts Soardi, former owners.

Raisa Rimini villa was built around 1880 it is of classic lines, simple and elegant. It is surrounded by a small park.

Villa Silvestri was also built around 1880, according to the classical schemes, with simple but elegant architectural lines. It is surrounded by a garden park.

Remarkable is the villa complex “The Fasanara”. It has an older part, the portico and loggia with high dovecote adorned with beautiful brick cornices, certainly fifteenth. The resort, however, is remembered in documents much older, and apparently derives its name from a game reserve of King Berenger, who in the tenth century had a villa in nearby San Floriano. The fifteenth century building has three arches in the porch, you’re in the loggia and two small round windows at the top, under the eaves, among the remains of a decorative painting that was to cover the entire facade, and which is also on track dovecote.

Villa “The Castle” is finally a large building, called “The Castle” perhaps because it was built on the site of an old manor. Now used as a farmhouse, it was once a manor house and has two four-pillared facade rustic surmounting each two arches of the porch.

My location
Get Directions
If you are planning your next trip to Italy book hotels, flights, rental cars at best price guaranteed!
Leave a comment marano, valpolicella, vino, wine