Matera is a wonderful place in the arid inland region of Basilicata in southern Italy. Matera is a town situated on the edge of a deep ravine and is divided into busy upper quarter and peaceful lower quarter Sassi (“caves”), which is further divided into Sasso Barisano and more picturesque Sasso Caveoso.

Matera residents formerly lived in houses dug into the rock. These two such different districts are making the city one of the most famous and amazing cities in southern Italy. The town of Matera with its surroundings is one of the sights inscribed on the UNESCO World Heritage List. 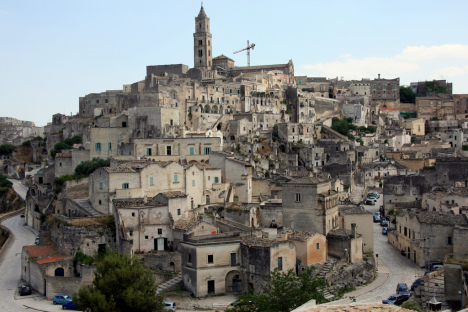 City of Matera is widely known for its unique ancient homes, called sassi, which are ancient settlements – caves dug in ravines. They are in the lower part of the city and around it.

Labyrinth of caves inhabited since prehistoric times can be seen from a specially built road, Strada Panoramica, but greater experience of this fascinating city will surely be enjoyed during the tour right among the dwellings.

It is not clear when the first dwelling were created in Matera. But it is certain that the site was inhabited already in the Palaeolithic, the ancient Romans knew this town and Matera has been continuously inhabited throughout the Middle Ages.

After the World War II, about 20,000 inhabitants still lived in the rocks of Matera (the place is still called “Sassi”, the stones or rocks), and the situation was already unbearable regarding hygiene, people suffered from disease, including malaria.

Then the Italian government decided to relocate the inhabitants of ancient Matera and built a new city for them nearby.

Definitely do not miss 120 or more cave churches (Chiese Rupestri), which were excavated by monks between 8th and 13th century, and the Museo Nazionale Ridola with a collection of archaeological artifacts that were found here.

Sassi in Matera, Basilicata by vic15

To get an overall image of this place step into the Strada Panoramica dei Sassi and watch the caves. Many chapels in the rock were took over by the villagers in the 15th century.

Thus began the colonization of caves. Until 18th century some of the caves already grew up into quite a monumental villas and monasteries.

In the 50’s and 60’s of 20th century, this place became a worse example of poverty, and the inhabitants were forcibly moved away of this dirty environment.

Carlo Levi (1912-1975) wrote a book Christ Stopped at Eboli about their miserable living conditions, where the Sassi district compares with Dante’s Hell. 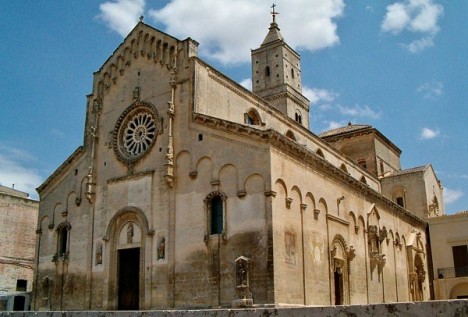 In the old Matera there are over 100 churches and shrines, the largest of which is the cathedral of the 13th century.

It is standing “free” in the slope, but many churches are true cave temples, often with ancient frescos on irregular walls. Today the maze of streets and stairs in Sassi are almost empty.