Palermo – totally different from any other European city

The capital city of Sicily, the fifth largest city in Italy, a home to about 660.000 inhabitants… At first glance, you might be disappointed and surprised – noise, traffic, disorder and misery in the streets. However, if you forget these unpleasant facts, eventually you will feel the unique atmosphere that is full of life.

Tourists are often fascinated especially by interesting contrast between past and present, beautiful buildings and lifestyles of local people. Palermo is situated on the northern coast of Sicily which is washed by waters of the Tyrrhenian Sea. 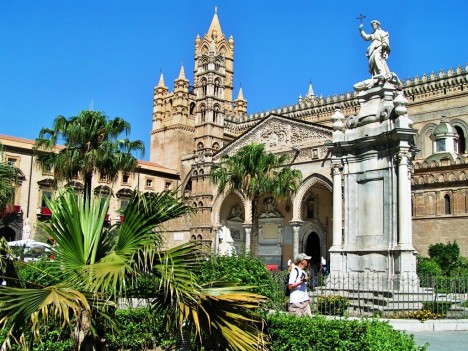 In the past Palermo was a very important traffic junction and the cradle of ancient civilizations. Palermo was founded by Phoenicians in the 8th century BC, but over time it was a home to the Romans, Byzantines, Arabs, Normans, Swabians, French, Spaniards and Austrians.

All these nations left something of their cultures here in the form of numerous architectural styles. And this is also one of the main reasons why Palermo is so interesting. 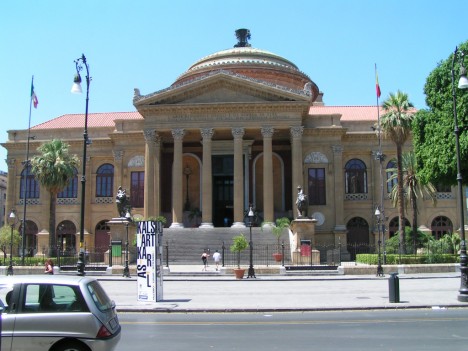 Various sites in the city centre are located relatively far apart, so it is necessary to use public transportation or rent a car. Palermo is crossed by three main streets: Corso Vittorio Emanuele, Via Maqueda and Via Roma.

The most attractive part for tourists is the old town which is full of palaces, churches, monasteries and museums as well. 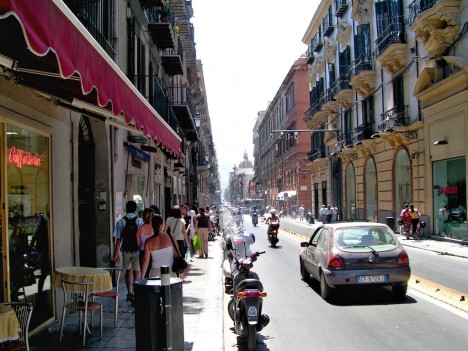 Streets of Palermo, Sicily by Julius

It is of 17th century and featured with fountains, statues and various niches. 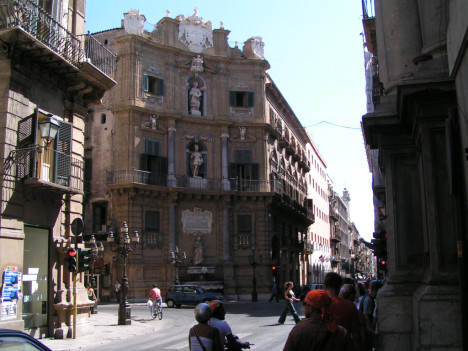 An important monument of the city is certainly Palace of the Normans (Palazzo dei Normanni or Palazzo Reale), which stands on the site of the former Saracen fortress of 9th century. The fortress was transformed into a palace complex by Normans, and became one of the most important European royal courts. 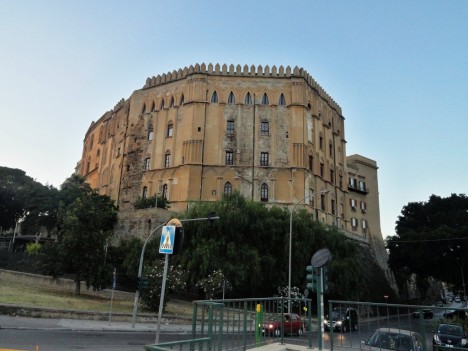 The palace hides also a unique chapel Cappella Palatina, which was built by the Norman King of Ruggero II of Sicily in the years 1132 to 1140. The chapel is now the most important jewel of Palermo.

Mosaic, which can be found in its interior, rank among the most beautiful in Europe. The complex also includes gardens of Villa Bonanno surrounded by palm trees. 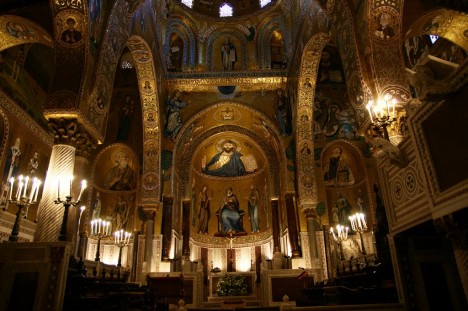 Original Arab mosques were replaced by Christian churches such as the Church of San Giovanni degli Eremiti from the early 12th century. There are still five large ochre domes as a proof of Arab origin.

Amazing is also the interior of baroque church Chiesa di S. Caterina, built between 1566 and 1596 that can be found on Piazza Bellini. 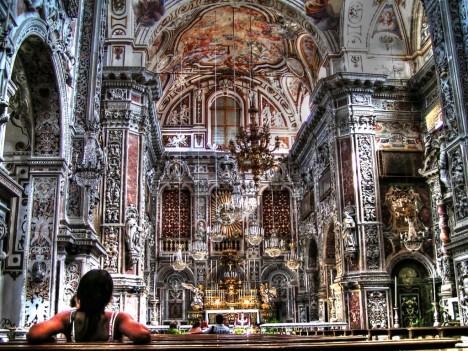 The city has Palermo Cathedral from 1184 that is similar to the Norman cathedral and is built of yellow stone. It boasts a unique portal of 15th century created in the interesting Catalonia-Gothic style. 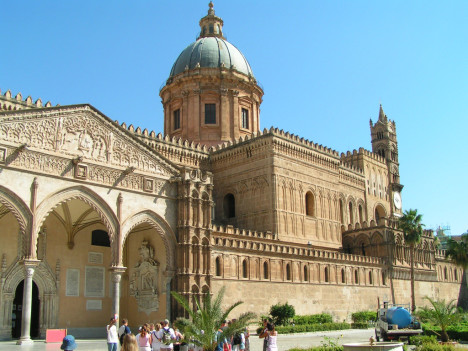 Church hides the royal tombs of Ruggero II, Henry VI, his wife and son. During its existence it has been rebuilt several times and such it is a building of different styles.

In the southern part of the city lies Piazza Pretoria with spectacular medieval and Renaissance houses and a fountain of 16th century decorated with shameless nude statues. 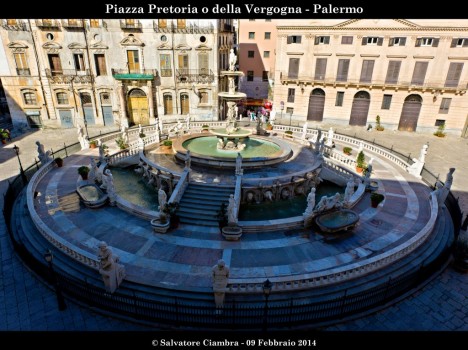 Among other monuments that worth a visit are e.g. Chiesa della Martorana and San Cataldo decorated with Moorish elements and baroque interior. Among the treasures of the rich Baroque decoration is also the church of San Giuseppe dei Teatino of 1612. 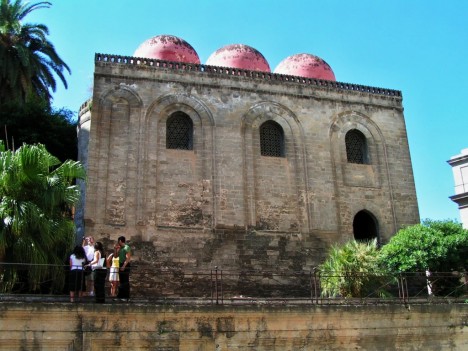 One of the busiest areas of Palermo is definitely Vucciria, which is a place of a large marketplace similar to the Arab Quarter. Here you can buy anything you can think of, from food, souvenirs to household goods. 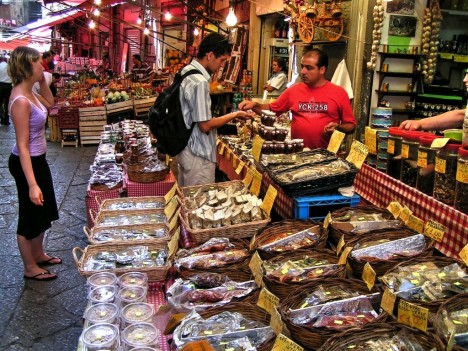 Lovers of history should not miss a visit to the main Sicilian archaeological museum Museo Archeologico Regionale, which holds exhibits from all parts of the island. 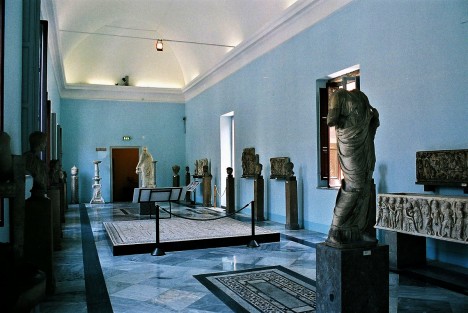 An important collection of paintings and sculptures can be find in the gallery Galleria Regionale Sicilia. Museo delle Marionette exhibits an extensive collection of puppets from all over Sicily.

In the nearby Piazza Marina is the Gothic Palazzo Chiaramonte-Steri from 1307, which is surrounded by beautiful gardens. Other gardens include Villa Giulia, Villa Bonanno, a botanical garden Orto Botanico and others. 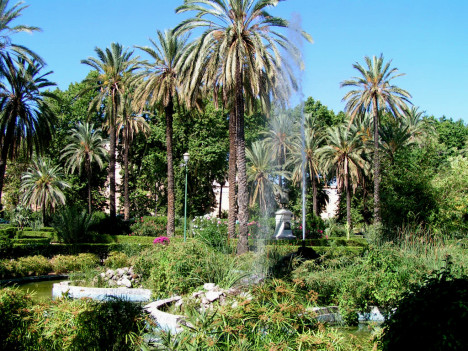 One of the most scary sights Palermo has to offer are Catacombe dei Cappuccini. In these gloomy underground passages are hidden dead human bodies that are preserved with arsenic, lime, and drying in the sun.

Overall, 8,000 human bodies are divided according to their position and a profession and you can even see children here. The first body was deposited here in the 15th century and the last in 1881. A visit to these catacombs is only recommended to those of you with a strong character. 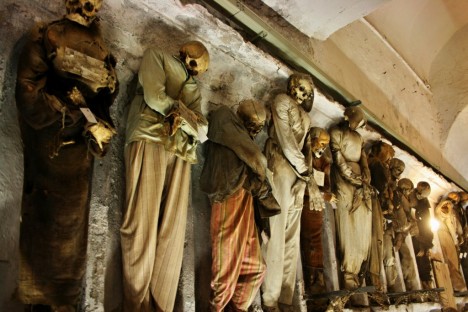 One interesting point I was really surprised during my visit in Palermo and I have to mention is the traffic. The red light on traffic lights does not mean stop!

So think twice before you rent a car here, as that can be really dangerous. But to be honest, I was very impressed with this city and will never forget it. 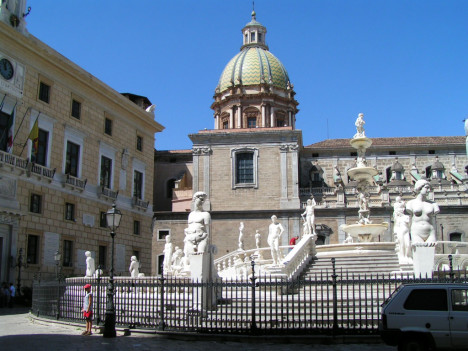