Once you are in Rome walking around the old town and looking for picturesque squares, you should visit Piazza Farnese. It is dominated by the Renaissance Palazzo Farnese, which was built in the 16th century and currently serves as the French Embassy.

Perhaps all major Renaissance artists were involved in its construction, so this is why the palace is considered to be the most beautiful Renaissance building not only in Rome but throughout entire Italy. 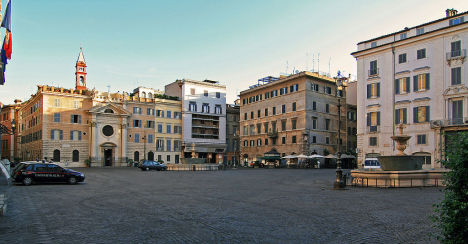 This grand palace is an integral part of the square on which it is situated. It was built by Alessandro Farnese, later Pope Paul III. Construction started in 1514 and was led by the architects Antonio Sangallo, Giacomo della Porta and Michelangelo. Giacomo della Porta created the rear facade of the palace facing the garden and Michelangelo designed the palace’s ledge and the central balcony.

The interior decoration was then made by artists like Agostino Caracci, Annibale, Giovanni Lanfranco and Domenichino. Most of the artwork is unfortunately not possible to see, because it houses the French embassy and therefore it is entirely closed to the public. So the only things you can see here are the facade and the fountains that are covered with lilies, which are a sign of the noble Farnese family. 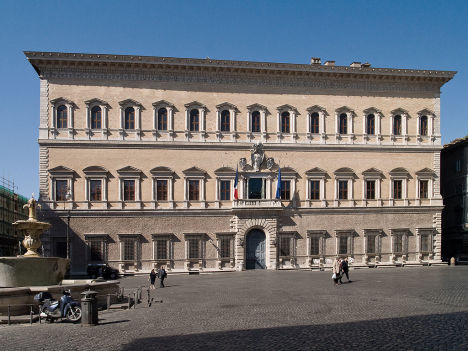 To the left of the palace there is the Church of Santa Brigida, which is considered the Swedish national church in Rome. St. Brigida died in 1373 in the neighboring convent. The house Casa di Santa Brigida hides the saint depicted on a small marble relief called “Ecstasy”. A woman is caught in a moment of mystical union with God.

During the Renaissance, the square was considered an integral part of an aristocratic mansion. Piazza Farnese was decorated with granite tanks originated from the Baths of Caracalla. It is here, where you can find two completely identical and beautiful fountains called Fontane di Piazza Farnese, both of which are made up of ancient marble basins. One of the basins was brought to the square by Pope Paul III. Farnese, the second one was brought here later. The basins were changed into fountains by Girolamo Rainaldi in 1626, and these are the fountains that we can still admire on Piazza Farnese. 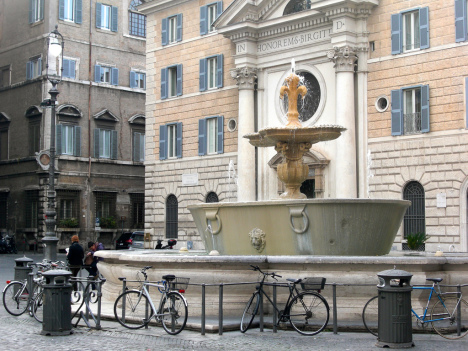 My location
Get Directions
If you are planning your next trip to Italy book hotels, flights, rental cars at best price guaranteed!
Leave a comment Lazio, Rome