Ribera is a small town in the province of Agrigento in southern Sicily with 20 000 inhabitants. It lies close to the sea at a height of 223 meters above sea level between two valleys (Verdura and Magazzolo valleys) on a plain called San Nicola.

The town and its surroundings is predominantly agricultural. But Ribera also offers a lot of historical and cultural monuments. For example, Church of Our Lady of the 17th century and the town hall from the 18th century. Just outside town is a castle Castello di Poggio Diana of 14th century. 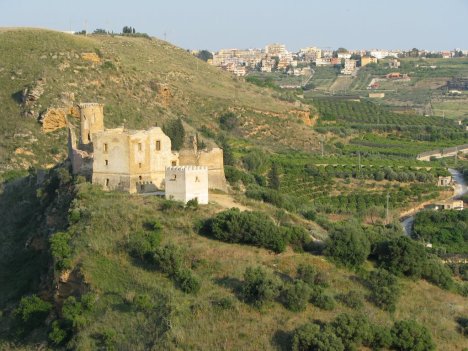 Beaches and resorts around Ribera

The area around the town also has a lot to offer. First of all, many, many kilometres of beautiful golden sandy beaches. On the coast near Ribera are a few coastal towns that are worth visiting, including Sciacca, Seccagrande, Eraclea Minoa and Torre Salsa. Little bit further to the west you can visit Selinunte with old Greek temples and excavations right above the beautiful beaches as well as Agrigento and Porto Empedocle on the east, with similar ancient temples.

A small resort of Eraclea Minoa is situated on a hill above the sea on the chalk cliffs. There are remains of the ancient city of Eraclea Minoa. You can see the remains of fortifications, residential district and the Greek Theatre. After this sightseeing you can enjoy the long sandy beach near the city.