San Gimignano is a small medieval town located in Tuscany, with a long history dating all the way back to the 3rd century BC as one of many villages the Etruscan people founded in what we know as Italy today. Originally the town was known as Silvia, named after one of two brothers – Silvio and Muzio, Roman patricians who fled the infamous Catilina plot which forced their hand after allegedly taking part in it.

Legend says they built two castles close to each other – Silvia and Mucchio. Of those two only Silvia survived the centuries and turned into a small, but successful city. The name of the city was changed from Silvia to San Gimignano in 450 AD due to the actions of Bishop Geminianus who saved the town from destruction at the hands of the Huns. 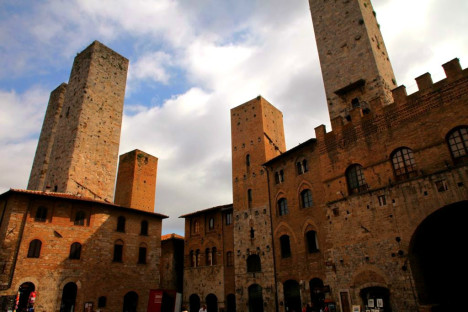 The town today stands as a world heritage site approved by UNESCO due to the well-preserved architecture and typically Italian atmosphere. The citizens of the town have been through a lot throughout the centuries from family rivalries, conflicts among the Guelphs and Ghibellines and even the Black Death, however that never dulled the powerful Italian spirit and wit the locals always exhibited and their respect for tradition can be seen today in the form of the town’s many towers which made it popular ever since medieval times.

Most of the city today stands on a hill surrounded and completely encircled by three sets of walls. At its highest point in the west stand the ruins of a fortress which was torn down during the 16th century. There are quite a number of entrances leading into the walled parts of the city – eight different gates total. There are three main gates which are mostly used and these are the Porta San Matteo at the northwest end of the city, Porta San Jacopo to the northeast and the Porta San Giovanni to the south.

One can see a great many examples of beautiful Romanesque and Gothic architecture in town. Some of the most impressive buildings apart from the towers are the church Sant’Agostino, which holds the works of a few Italian Renaissance painters and artists and the Collegiata, a former cathedral which now holds an impressive number of frescoes and artwork originally started back in the 14th century and added on as the church expanded. 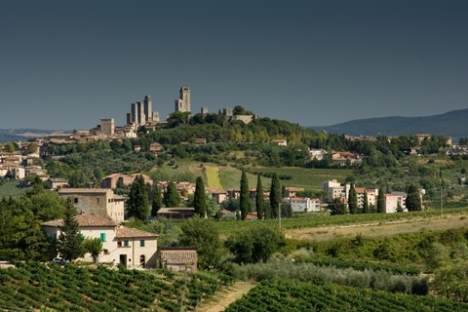 Although San Gimignano has many beautiful historic streets, buildings and churches it was mostly known as the City of Towers because of the fourteen tall towers around town well preserved after many centuries since their construction. The tallest among them are: 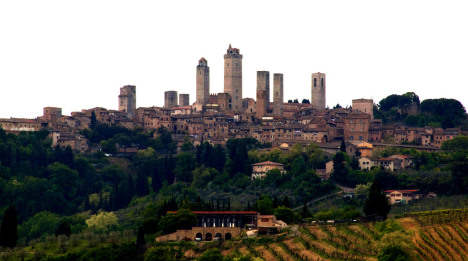 Besides those you have the shorter, yet no less impressive Torre Cugnanesi, Torre Pettini, Torre del Diabolo, Torre Chigi, Torri degli Ardinghelli and Torri dei Salvucci. The majority of those towers are situated around the Piaza del Duomo, which serves as a focal point for tourists. A long time ago when the town first built the Torre della Rognosa a city edict forbade the building of towers higher than Rognosa because it was erected from the local town hall. Amusingly local merchants and other wealthy citizens bought lots surrounding this tower and created their own towers around it, which led to the unusual number of them around town. 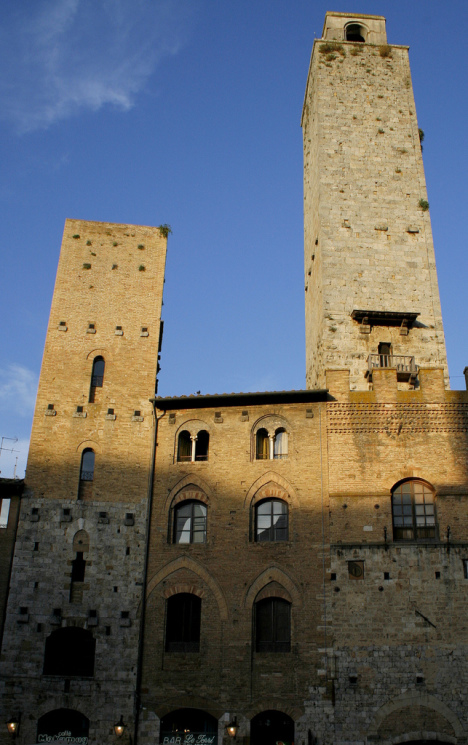 The town has been used in works of fiction by various authors and artists and video games such as Assassin’s Creed II, which allows you to “walk” the streets of the ancient city, so to speak. If you ever do visit this wonderful location make sure you visit the SanGimignano1300 museum, which allows a reconstruction of the city as it was supposed to look like seven hundred years ago, which will give you an idea about the layout and the evolution of the local architecture during the centuries.