Naples is beautiful… This bustling metropolis of Campania, called Napoli in Italy, can offer its visitors really a lot. But you must be prepared for indeed a mass of people!

In terms of population the city itself is the third largest city in Italy (after Rome and Milan), but with its neighbors and suburbs forms the second largest continuously built-up area in the country with nearly 3.2 million inhabitants. Then you just need to count with a Southern temperament and the result is a really busy place. 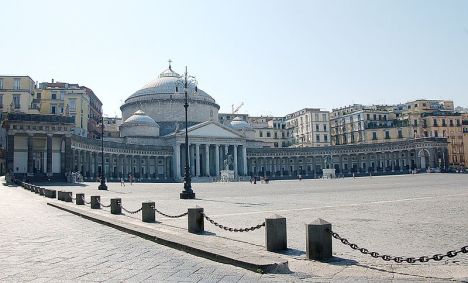 Naples is beautiful already just because of its location. It is situated in the picturesque Bay of Naples. However the beauty of this place is hidden behind a great danger, which is nearby volcano Vesuvius and Campi Flegrei volcanic area.

Skyline of Naples with mount Vesuvius by Rosino

But what’s in Naples to see?

Due to its rich history, dating back to the 8th century BC, the city offers quite a lot. Let’s start with a few castles and forts. One of them, Castel Nuovo (“New Castle”), also known as Maschio Angioino, is a symbol of the city center.

It was completed in 1282 at the request of Prince Charles I of Anjou, and later, of course, variously modified and rebuilt. The massive building with five large circular towers looks very interesting. Today you can find here, among other attractions, the city museum. 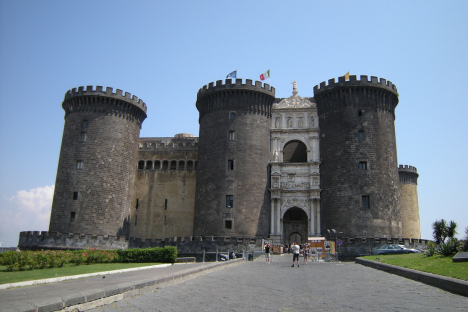 Another frequently photographed castle is Castel dell’Ovo (“Egg Castle”). It is picturesquely situated on a small island of Megarides so it is directly washed by the sea water.

The castle got its special name according to legend, claiming that in the castle cellar was once hidden eggs bearing the whole structure of the building. If the egg broke, the whole castle would end up in ruins and the city would be affected by a disaster.

The castle stands on the site where the first settlers coming from the ancient Greek colony of Cuma landed. 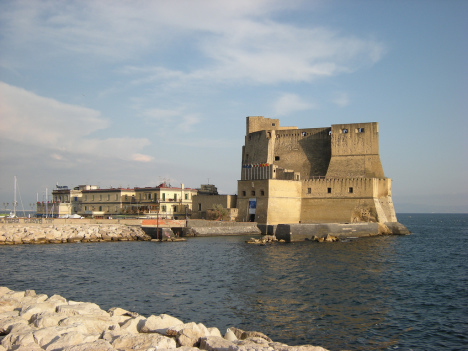 Castel Capuano also comes from the 12th century when the Normans ruled the area. It was built by William I., the second king of Sicily. Its present form dates to 1860 and does not reflect its original appearance. 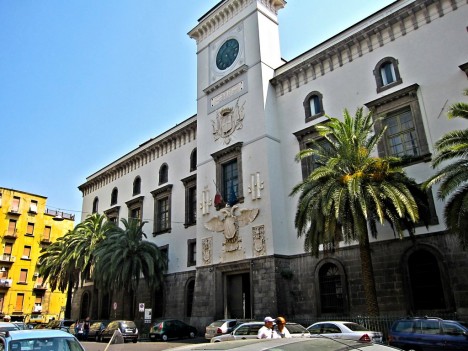 Another fort Castel Sant´Elmo situated on the hill Vomero, was completed in 1343. Its founder, Robert of Anjou, died in the same year. In the 16th century, it was rebuilt and got interesting stellated plan, which still retains.

In the history of the city played a relatively important role. Today you will find here a museum of art history called Bruno Molajoli.

Right next to the fort is the Cartesian monastery Certosa di San Martino from 1368. The building is no longer used for religious purposes, but you will find a museum of art objects from the Bourbon and Spanish era, and a collection of Nativity Scenes, one of the largest of its kind in the world.

Both these buildings are worth a visit because they offer a very good view of the beautiful city of Naples. They also forms a kind of symbol of the city, as they are visible from afar. 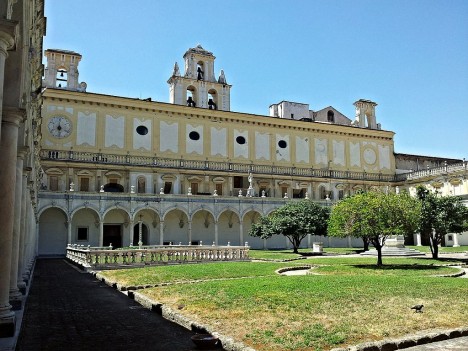 From the fortification buildings of Naples, I should also mention Carmine Castle, built in the 16th century by Spaniards. The building was of great strategic and military importance, and was involved in the history of the city.

However it ended ingloriously – even if it was not destroyed by besiegers, eventually it largely broke down in 1900 during the construction of new roads. Until now there are only two towers and a few other residues preserved. 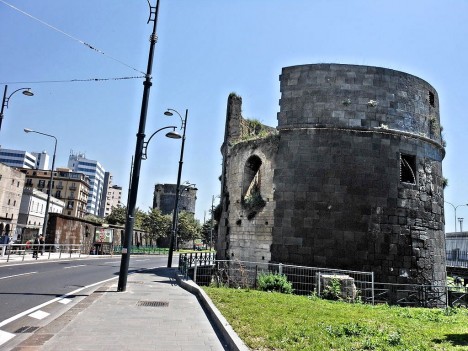 If you are tired of castles and forts, then you could change your itinerary and go for some churches. I am rather not going to describe all the churches and religious buildings, which Naples is full of.

Indeed, in the 18th century, Naples was called “la Città dalle 500 Cupola” (city of five hundred towers), the majority of them were towers of churches and monasteries. However it is necessary to mention a few of them. 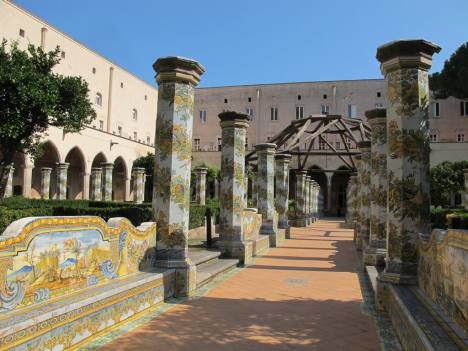 Right in the center stands the Monastery of Santa Chiara, which was, like many other buildings, built by Robert of Anjou between 1310 and 1340. Unfortunately, almost the entire building disappeared in 1943 during intensive Allied bombing of the city.

However, it was rebuilt and reconstructed into its original Gothic form. Robert of Anjou, nicknamed the Wise, King of Naples, Duke of Calabria, King of Jerusalem and the Earl Provençal is buried here. 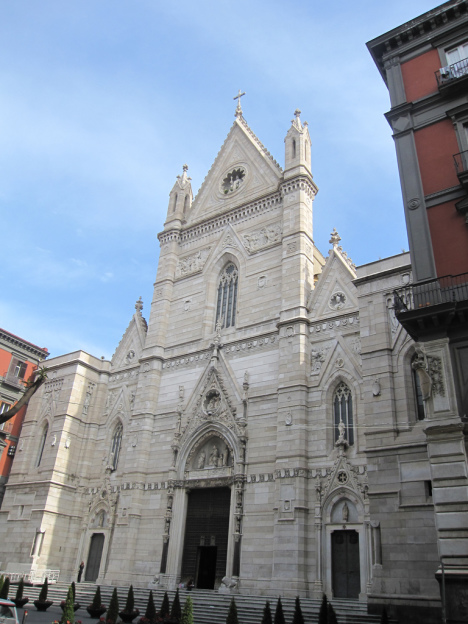 Other attractions of the city include a myriad of palaces, museums, theaters and other cultural sights. Recommended is a tour of the city catacombs. The oldest part of the local catacombs comes from the 3rd century. Entrance to the underground is located near the Church of Madre di Buon Consiglio.

Worth mentioning is also a new modern district Centro Direzionale. You can find it easily, tall skyscrapers are visible from afar. The district was designed by the Japanese architect Kenzo Tange in 1982 and is situated on places that were considered to be the worst and most dangerous part of the city.

Instead of criminals and thieves it is now home to a majority of local authorities, apartments and shops. It is actually a sort of city within a city. 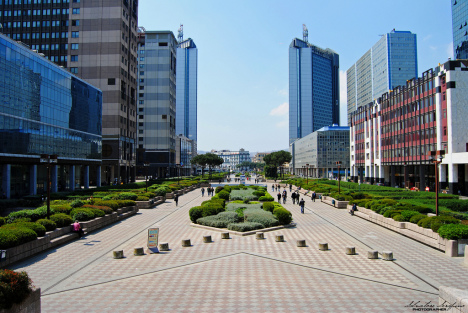 A good idea to explore the sights of Naples is to visit Museo Archeologico Nazionale. Then head south through the old part of town to enjoy an amazing atmosphere. Continue further south until you get to the sights which are around the harbor and coastline.

If you still have some more time, you can also visit some of the remote attractions. One of the most exciting experiences waiting for you is a tour of the ancient underground tunnels, cellars and sewers, mysterious Naples underground, called Napoli Sotterranea. Some tunnels are from Greek times.

The third largest city in Italy is surrounded by Mount Vesuvius, the mountains, the sea and the islands of Capri, Ischia and Procida. Thanks to the favorable climate and lively cultural and artistic events Naples can also be visited in the winter months. 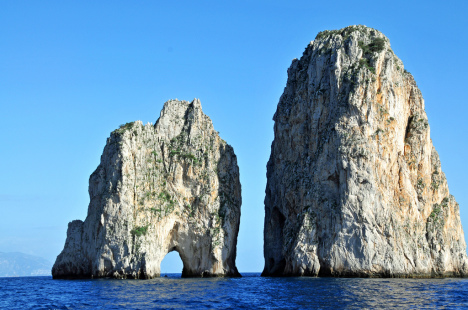 In the vicinity of Naples there are several other places that worth a visit. The most famous of them are Pompeii and Herculaneum. Also very popular among tourists is nearby Amalfi coast. Naples is therefore suitable as a starting point for excursions into the surrounding area.

Naples is definitely one of the most typical Italian places, the living, beating and vibrant city, which requires a lot of time to be completely explored.