In the northwestern part of Sicily, in the province of Trapani, you can find a small town of Segesta, which history goes back far into the past. Founded about 1200 years before Christ, Segesta was considered a center of Elymian people. Elymians were one of the indigenous people of Sicily. In the 5th century BC, they built the unique Doric temple near Segesta, which is now a popular tourist attraction.

However Segesta was once also a home to Ionians. So Elymians were soon Hellenized and adapted the characters of Greek life. City rivaled with today’s city of Selinunte for a long time. There were many battles between them, but the last one had an major impact on the whole Sicily. 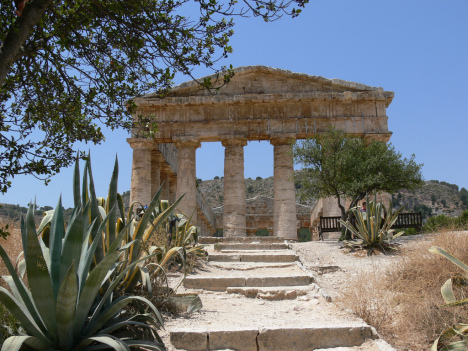 In 415 BC, Segesta asked Athens for help, which led to a bloody disastrous Athenian expedition to the island. Later on, they also asked Carthaginians for help who completed the work of destruction – Selinunte was totally destroyed. Segesta then held an alliance with Carthage, for which was surrounded with troops of Dionysius I of Syracuse around the year 400BC and later finally conquered by Agathocles.

The city had to recover several years, but already in 276 BC, began to cooperate with the king Pyrrhus of Epirus. However at the end of the year 260 BC, it changed sides and raised an alliance with the Romans. Segesta was finally granted the status of a free city.

Development and indeed the whole existence of this state-of-the-art city was terminated by the Vandals raid. At present we can only admire the remains of the ancient city of Segesta, which is spread over the top of Monte Barbaro, at an altitude of 305 meters above sea level. From the top there is a beautiful view of the valley leading to the Gulf of Castellammare. 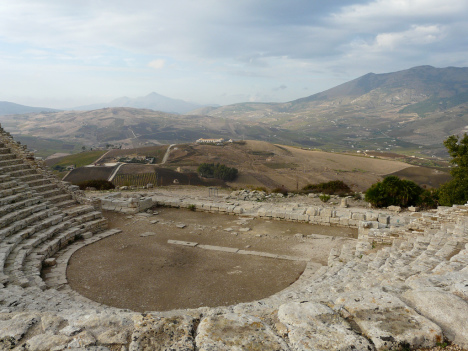 The amphitheatre at Segesta, Sicily, Italy by Tristan Ferne

According to the recent archaeological findings Segesta was also home to Muslims who built their own cemetery here and in the 12th century built a mosque near the Norman castle. The mosque was later destroyed by a new Christian ruler who came to Segesta. In the second half of the 13th century, the city was abandoned.

While in Segesta, pay a visit to an ancient theater with a semi-circular auditorium in the rock, where you can still attend a variety of performances. There is also Doric temple of 5th century BC on a hill outside of the city. It consists of six columns in width and fourteen in length.

Most likely, this temple was never completed, because it lacks certain parts, including roof. The temple is thus quite unusual – a Greek building built in the city of mostly non-Greek ethnicity. Even though the temple was not completed, it still dominates the local hilly landscape.

My location
Get Directions
If you are planning your next trip to Italy book hotels, flights, rental cars at best price guaranteed!
Leave a comment Agathocles, Carthage, Dionysius I of Syracuse, Doric temple, Elymians, Gulf of Castellammare, Pyrrhus of Epirus, Trapani