Syracuse – the most powerful city in the Mediterranean in Ancient Times

The history of major Sicilian city of Syracuse dates back to 733 BC when it was founded by the Greeks. During the time it grew up and since 5th to 3rd century BC became the most powerful city in the Mediterranean. Greeks, Etruscans and Carthaginians tried to conquer the city, but it was the Romans who finally managed to do this in 212 BC.

Syracuse is located in the the southeastern part of the island. Thanks to the numerous historical sites, romantic corners, natural attractions, and rich cultural opportunities Syracuse became one of the most visited tourist attractions in Sicily. Sea Gulf of Porto Grande is one of the finest and largest natural harbors in Italy. 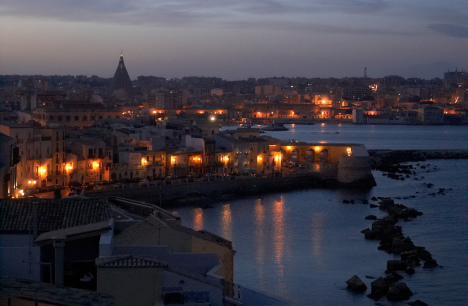 Part of the historic center of the city is situated on the island of Ortigia, which is separated from the mainland by a narrow channel and connected by roads. It is here where the city was founded and local port has become the heart of this ancient city for more than 2,500 years.

Today, this island has rather baroque and medieval appearance, as there was big earthquake in 1693. Among the major attractions are the Christian Cathedral from the 5th century with baroque facade and the oldest Sicilian Doric temple Tempio di Apollo. 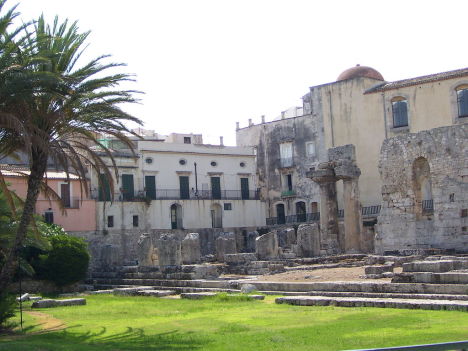 Ruins of the Temple of Apollo in Syracuse, Sicily, Italy by BartoFactory

The other part of the city, located on the mainland, is a modern city built after the World War II, which is not interesting for the tourists at all. However it is here where you can find extensive archaeological area Parco Archaeologico della Neapolis, which is one of the biggest attractions of the region.

Parco Archaeologico can be found on the place of the ancient Greek city of Neapolis. The most important monuments that have been preserved until now include sacrificial altar called Ara di Ierone II from 3rd century BC and the rocky amphitheater Teatro Greco with initial capacity of 15,000 spectators.

Nearby is an ancient quarry Latomia del Paradiso, or cave L’Orecchio di Dionisio which is famous for unique acoustics. You can also find another cave Grotta dei Cordari, which was, thanks to its air humidity, used as a hemp storage. 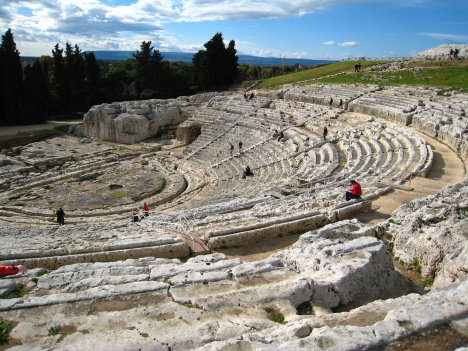 Syracuse is the birthplace of an important mathematician and scientist Archimedes, who helped to defend the city from Romans attacks in 212 BC. Archimedes Square (Piazza Archimede) is now one of the main squares. History lovers should certainly not miss a visit to the museum of excavations Museo Archeologico Regionale.

Another unique monument is catacombs Catacombe di San Giovanni, which are the oldest catacombs on the island and the second largest in the world. You can take a pleasant walk through the promenade Passeggio Adorno. Unique paintings of major Italian artists can be found at Galleria regionale di Palazzo Bellomo.

Syracuse is a colorful and vibrant city and definitely should be a part of your travel itinerary to the island of Sicily.

My location
Get Directions
If you are planning your next trip to Italy book hotels, flights, rental cars at best price guaranteed!
Leave a comment Neapolis, Ortigia, Sicily, Teatro Greco, Tempio di Apollo