Taormina – one of the most magical and romantic places in Sicily

Taormina is a historical town situated on the eastern coast of the largest Italian island of Sicily. With its atmosphere, numerous monuments and convenient location is considered to be one of the most magical and romantic places on the island. It was built at the foot of Monte Tauro at an altitude of 200 meters above sea level. It offers a fascinating views of the active volcano Mount Etna and the azure blue Ionian Sea.

Taormina’s history dates back to the 4th century, when the city was founded by settlers from Naxos. It was later, during the 3rd century BC, when Greeks showed their greatest architectural art and built one of the most beautiful theaters in the world.

Taormina’s Teatro Greco is the second largest, just after that one in Syracuse, but also the only that has retained its stage. There are also preserved parts of the passage and auditorium. The theater regularly hosts numerous art and music festivals. 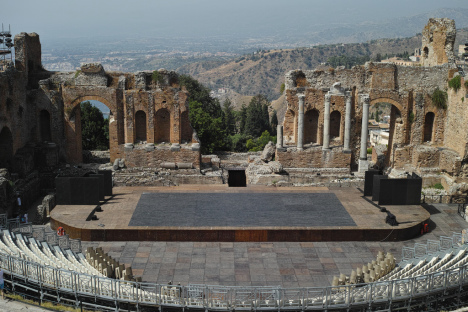 You can enjoy unique atmosphere by walking through narrow and steep streets of the town, which always lead to some panoramic terrace or square. The main square is Piazza IX Aprile with lots of cafes, pastry shops, restaurants and pizzerias inviting you to sit down and taste the local specialties.

The main shopping street in the city is Corso Umberto I, offering many shops, boutiques, first class hotels and restaurants. The town still preserves its ancient appearance and pleasant atmosphere, which make it one of the most visited and most attractive resorts in Sicily. However, it is better to go to Taormina in low season when the streets are not so overcrowded. 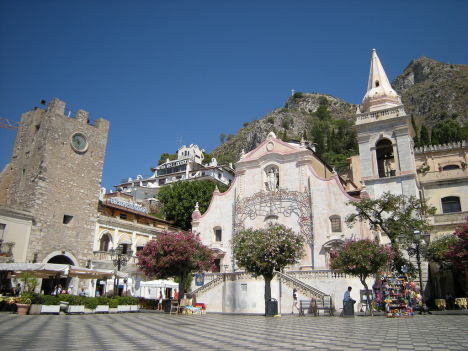 Once you are there, you can also visit Taormina’s city garden Giardino Pubblico on Via Croce. Among other architectural monuments are, for example, picturesque St. Catherine Church, a Dominican monastery and several palaces.

Approximately 3 km away from the city, you can find medieval fortress Castelo Saraceno, which stands at 390 meters high Monte Tauro. Originally there were Greek acropolis. The mountain offers beautiful views of the surrounding landscape.

Among other advantages of Taormina are also beautiful beaches of Mazzaró Bay and Isola Bella, which provide great relaxation, lots of water sports activities including swimming in the crystal clear sea. 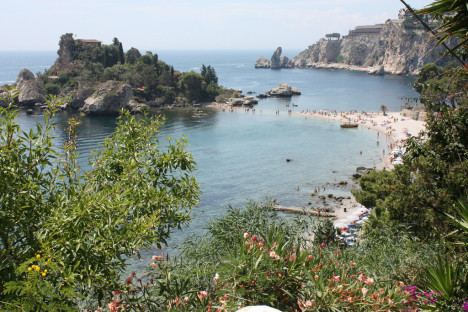