Top 20 cities to visit in Italy

It’s quite hard to make a list of 20 most beautiful cities to visit in Italy, as every city in Italy has its own look and unique atmosphere. However some of them are more popular than the others. And here is the list of them.

The city of Rome is not just the capital of Italy, it is also the most visited city of the country. Known as “The Eternal City”, Rome is home to almost four million full-time residents. As one of the world’s most visited destinations, the city’s population swells during the peak months of the tourist season. Find accommodation and hotels in Rome: 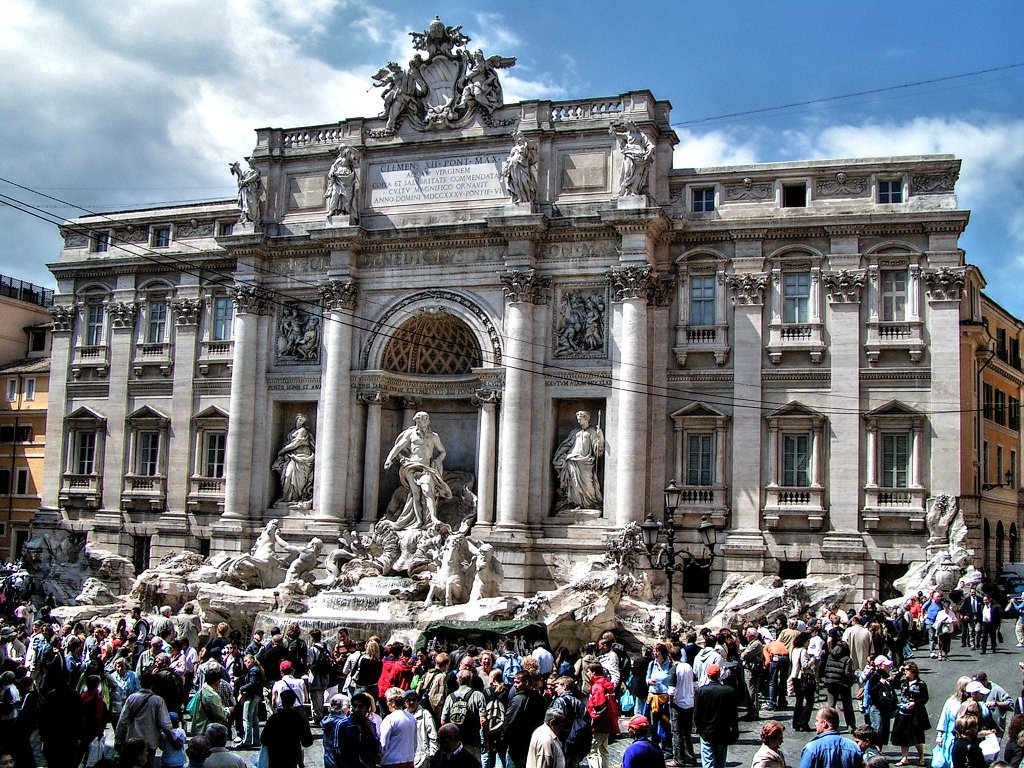 Located in the northeastern part of the country, Venice is a destination hotspot. Consisting of 118 tiny islands, the city of Venice is known for its gondolas and canals. The entire city is known as a world heritage site and for good reason; the entire city itself is one of the world’s finest works of art. Find accommodation and hotels in Venice: 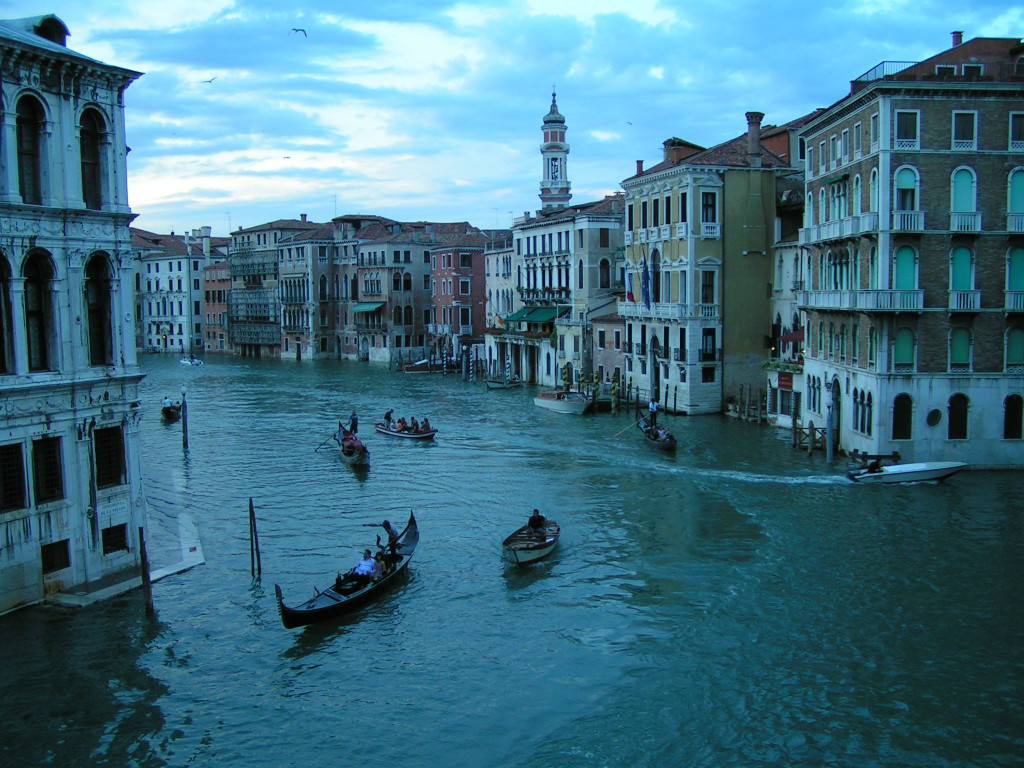 Evening in Venice, Veneto by Julius for Travel via Italy

Anyone who has ever thought of visiting Italy has contemplated going to the city of Florence. Known as the birthplace of the Renaissance movement, the city is filled with museums and some of the world’s finest paintings and sculptures. Find accommodation and hotels in Florence:

There is so much history in Florence that is just waiting to be experienced. 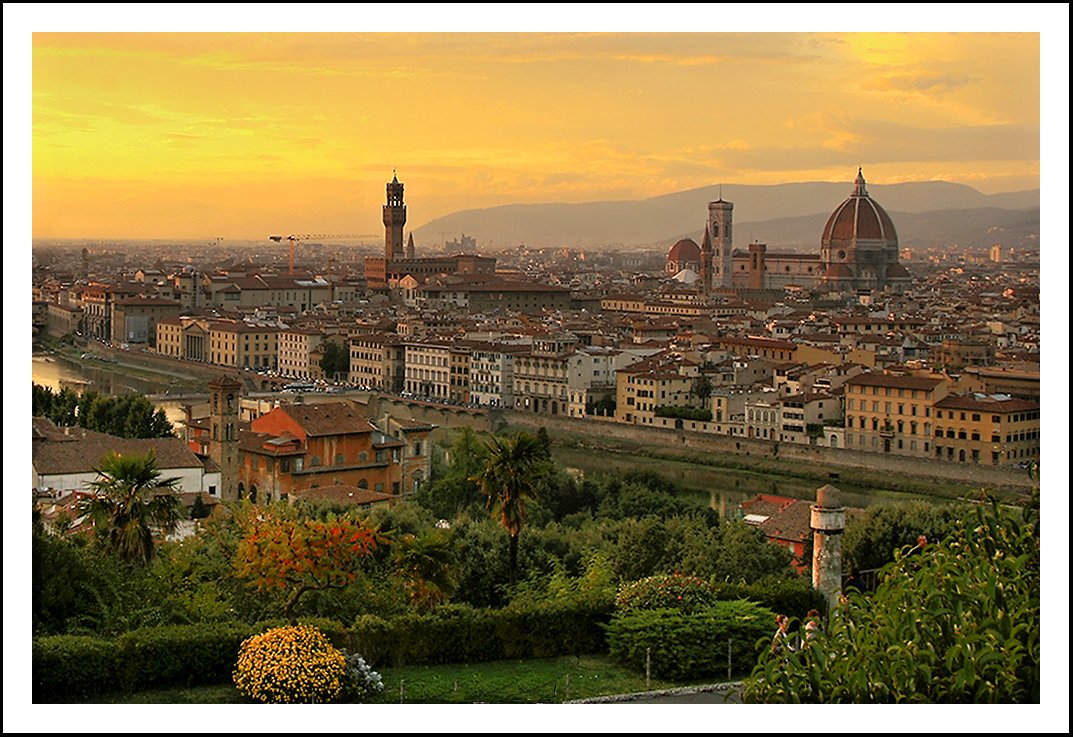 Sunset in Florence, Tuscany by Steve

The second largest city in Italy is that of Milan. With more than five million residents living in the metropolitan area that includes the city, it is also the fifth largest urbanized area in the entire European Union. Find accommodation and hotels in Milan:

While the history of the city dates back to the days of the Celtic tribes, most of the city itself was heavily damaged as a result of the Second World War. 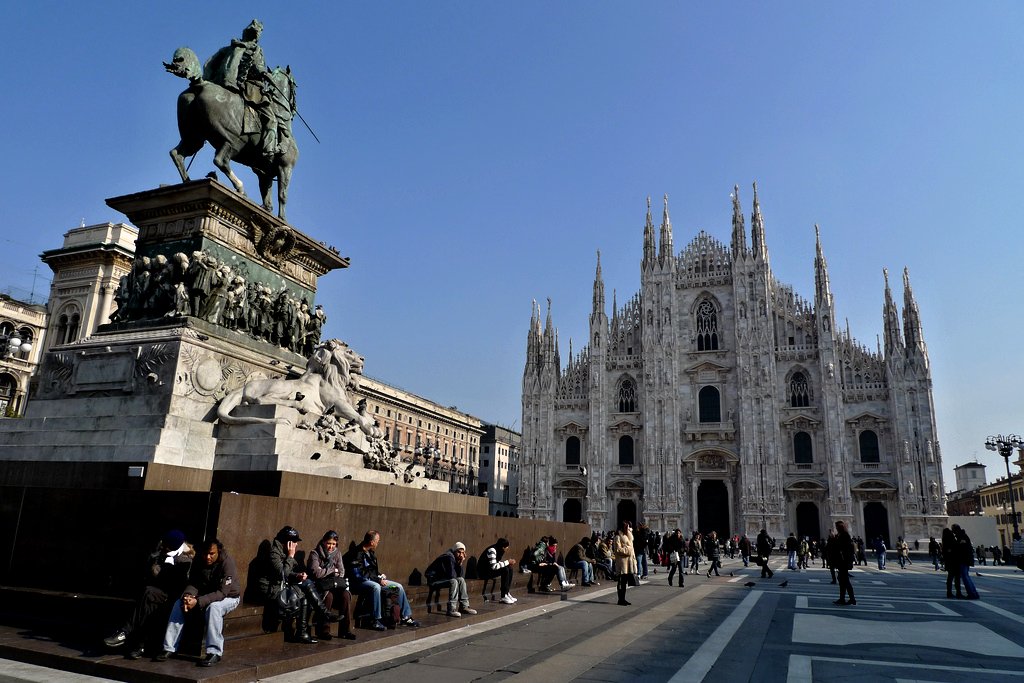 The city of Rimini can be found along the shores of the Adriatic Sea, nestled between the banks of the Ausa and the Marecchia Rivers. It is considered by many to be one of the most popular seaside resort destinations in Italy thanks to its more than fifteen kilometers of sun-kissed beaches. Find accommodation and hotels in Rimini: 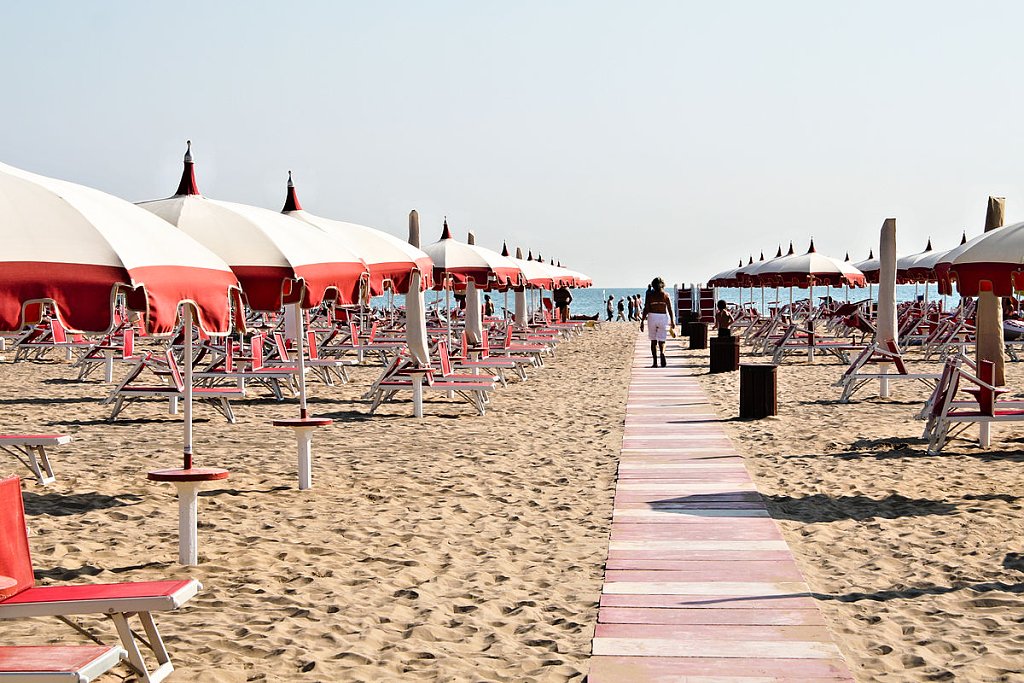 With just under a million inhabitants living in the city, Naples is considered to be the third largest city in Italy. There are more than 3.7 million residents in the metropolitan area which makes Naples the eighth largest urbanized area in the European Union. Find accommodation and hotels in Naples:

Situated along the coastlines of the Mediterranean Sea, Naples is considered to be the oldest city in the world that has been continuously inhabited. 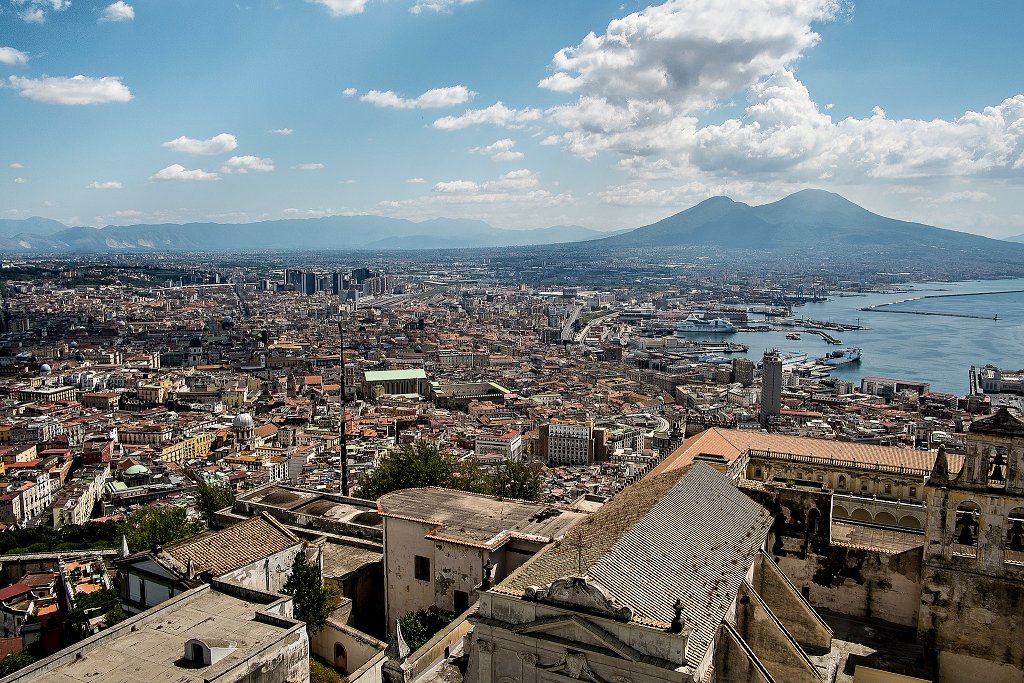 The city of Pisa can be found along the shores of where the River Arno meets the Tyrrhenian Sea. The city is most well-known for its infamous leaning tower which has attracted millions of people over the ages. The city also has many ancient churches and palaces that are just waiting to be explored. Find accommodation and hotels in Pisa: 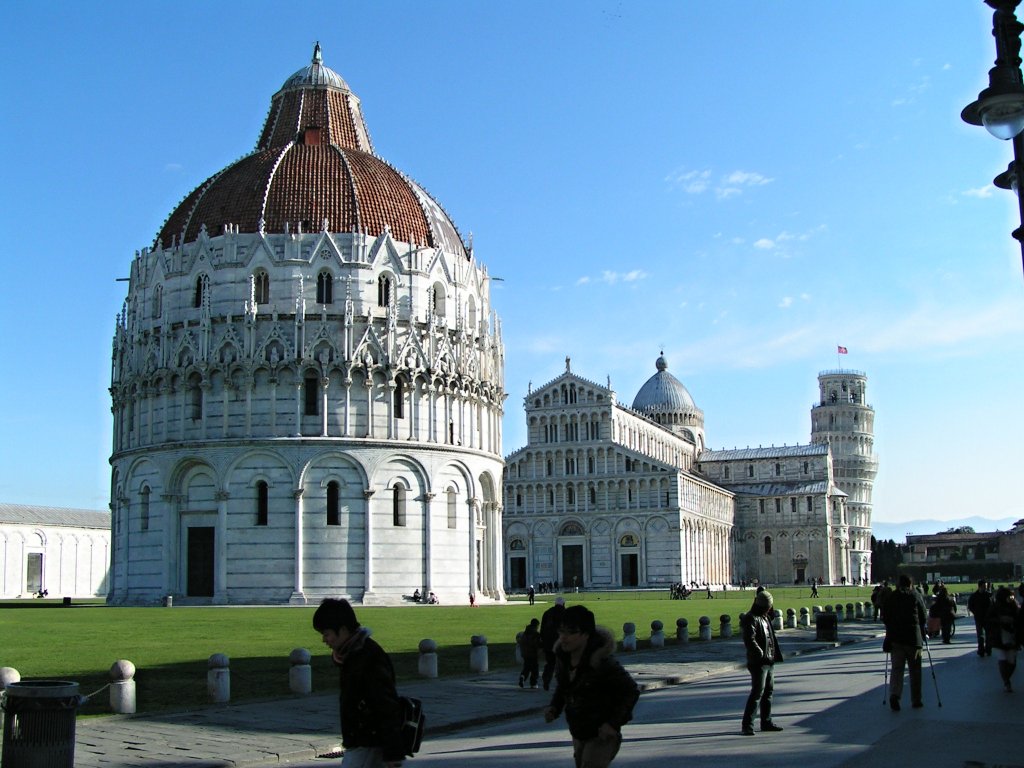 Located in the northern part of the country, Verona is one of the most popular destinations Italy. The city is filled with history and charm.

There are a number of ancient sites in Verona that date back to the Roman period. The city also hosts a number of annual shows, fairs and of course operas. Find accommodation and hotels in Verona: 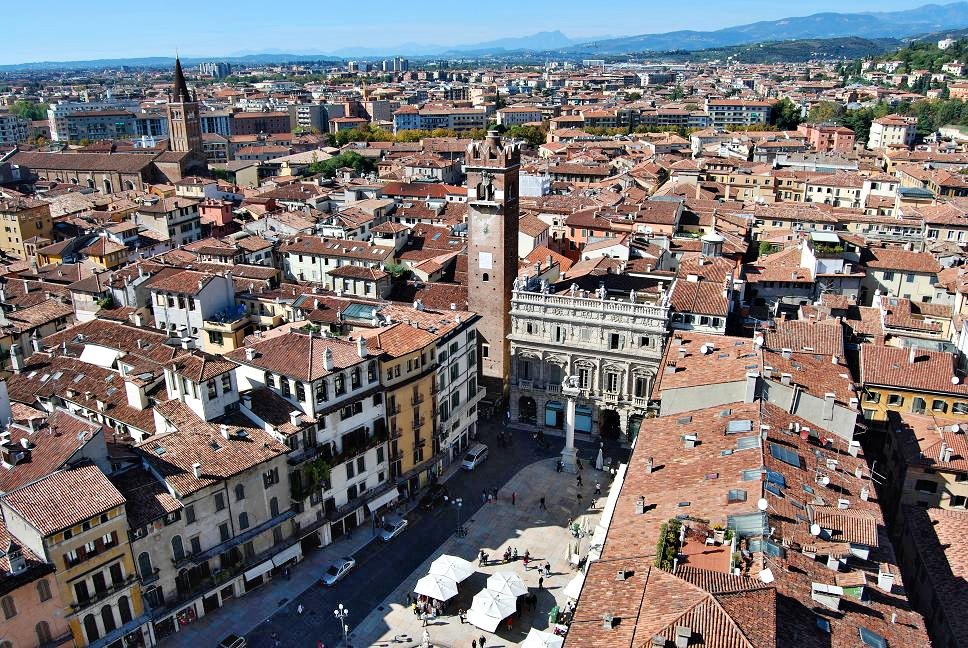 The city of Palermo can be found just to the northwest of the Sicilian Island and along the shores of the Tyrrhenian Sea and the gulf which shares its name. Originally founded by the Phoenicians, Palermo has played an important historical role in a multitude of civilizations throughout the ages. Find accommodation and hotels in Palermo: 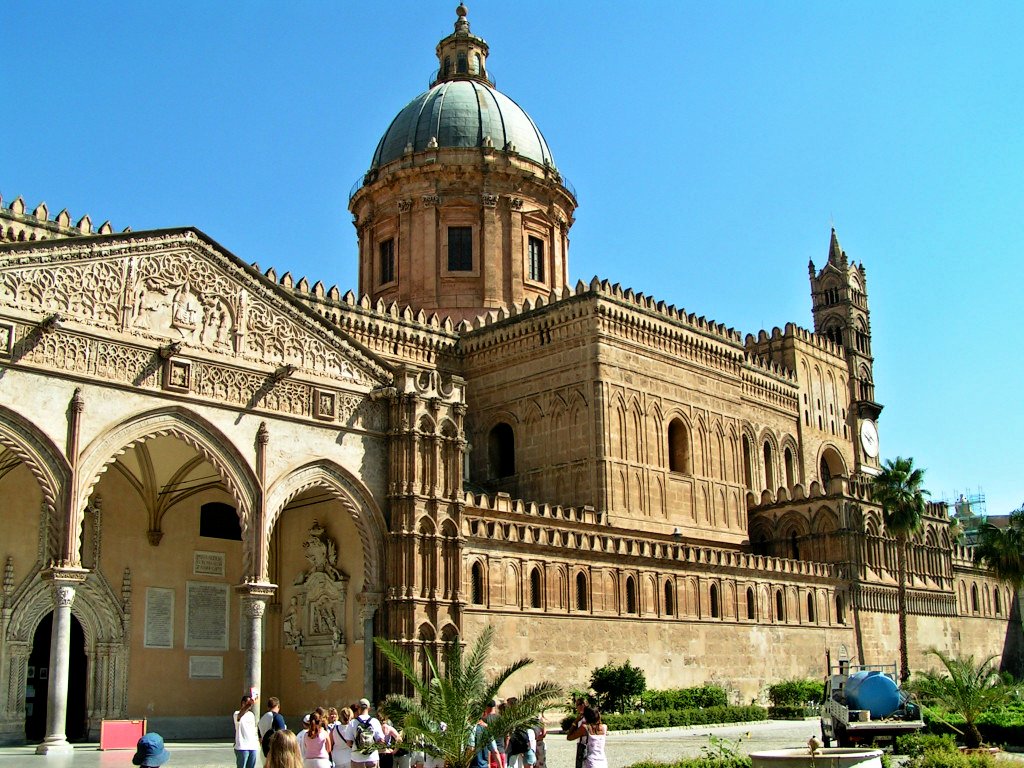 Palermo Cathedral, Sicily by Julius for Travel via Italy

Just to the north of the popular Italian city of Venice is where you will find the town of Jesolo. Situated along the shores of the Adriatic Sea, nestled between the banks of the Piave and the Sile Rivers, its no wonder why Jesolo developed into such a popular seaside resort town. Find accommodation and hotels in Jesolo:

Almost four and a half million people each year make their way to Jesolo.

Situated upon the Sorrentine Peninsula and overlooking the Bay of Naples, Sorrento is well known for offering some of the most spectacular picture-perfect views imaginable.

The seaside cliffs of Sorrento are covered with some of the most luxurious hotels and resorts in the area and from these cliffs, one is afforded the most amazing views of the island of Capri as well as the infamous Mount Vesuvius. Find accommodation and hotels in Sorrento: 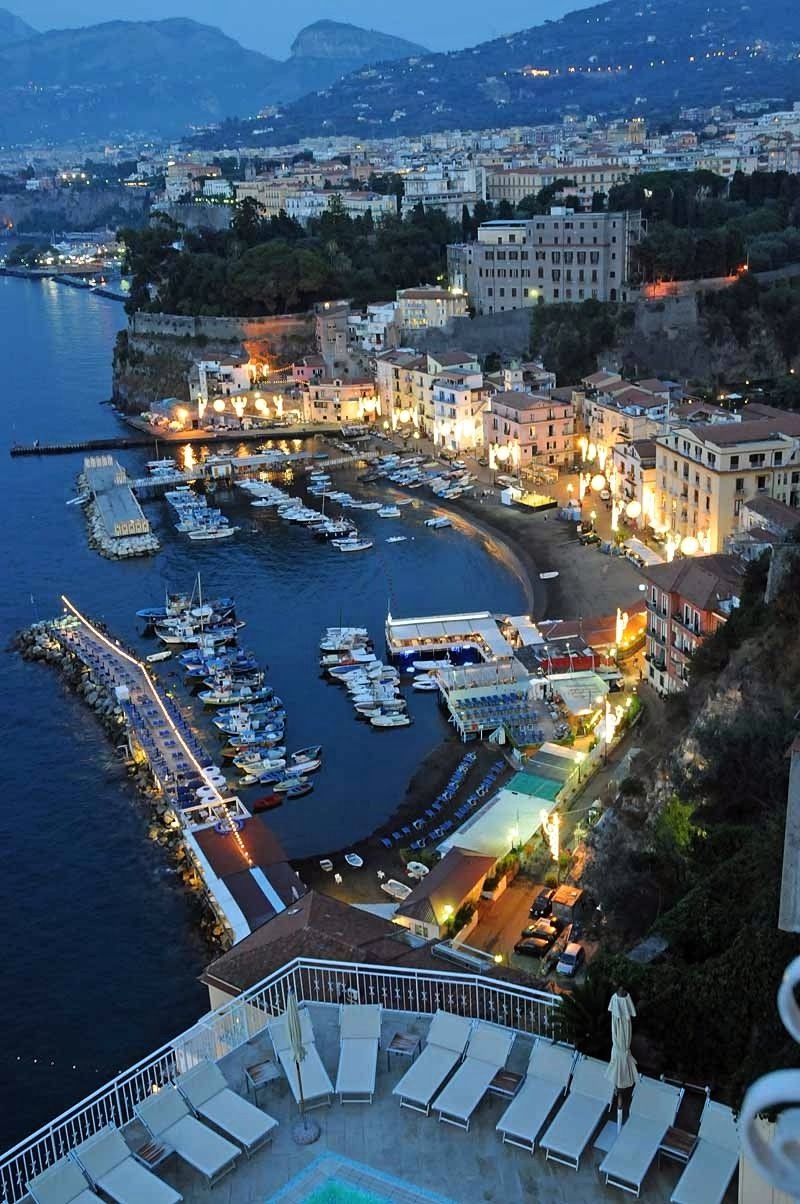 The city of Bologna is one of the more livelier cities in the country. It is home to many of the nation’s finest universities. The college life in Bologna is something that has to be experienced first-hand.

While the city dates back to the days of the Etruscans, most of the city was badly damaged during the Second World War. Conservation effort has been ongoing in an attempt to restore it to its prewar glory. Find accommodation and hotels in Bologna: 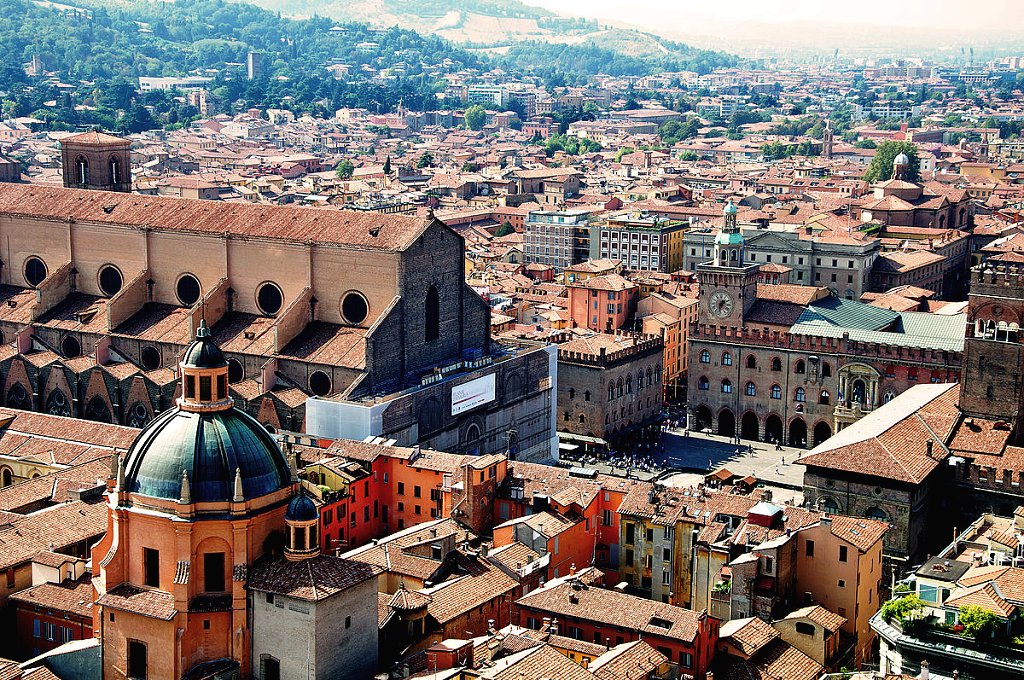 The sleepy little town of Alghero can be found in the northwestern portion of Sardinia. Situated along the coasts of the Mediterranean Sea, Alghero has grown in popularity over the years as a popular destination hotspot.

The area that surrounds the city was first inhabited back in 4,000 B.C. and many archeological treasures have been uncovered in the region to date. Find accommodation and hotels in Alghero: 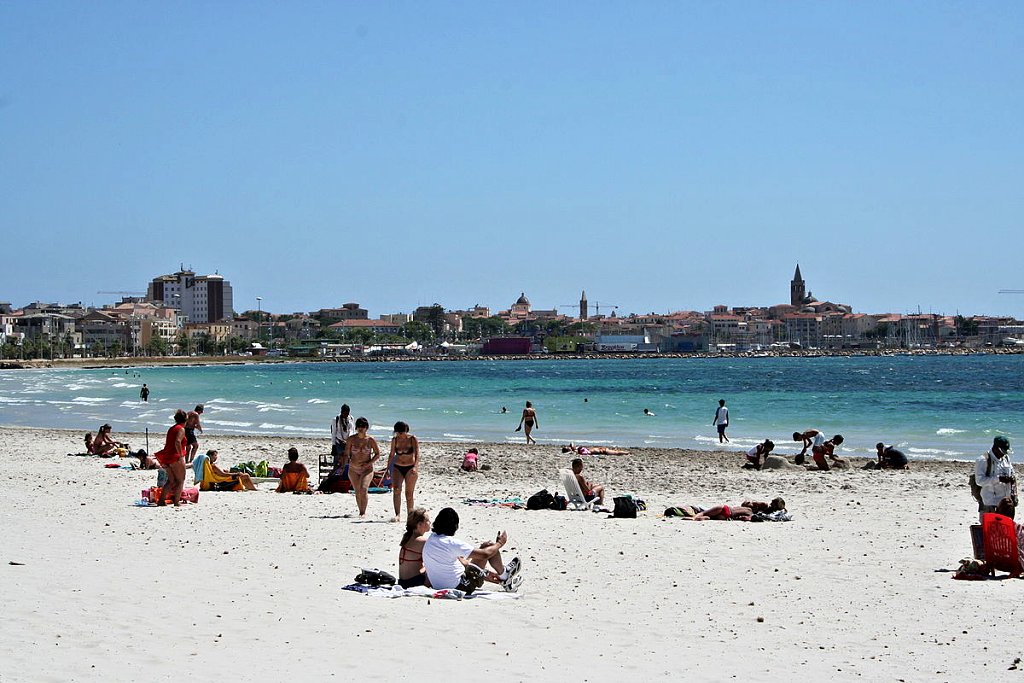 View of Alghero from Lido’s beach, Sardinia by Jimmy Flink

The historic city of Siena can be found in the Tuscan region of Italy and is known for its annual horse races. The horse races which are held on two occasions throughout the year are part of a month-long celebration.

Known as one of the top hotspots in Italy, countless people have made their way to Siena every year to witness the Palio races first hand. Find accommodation and hotels in Siena: 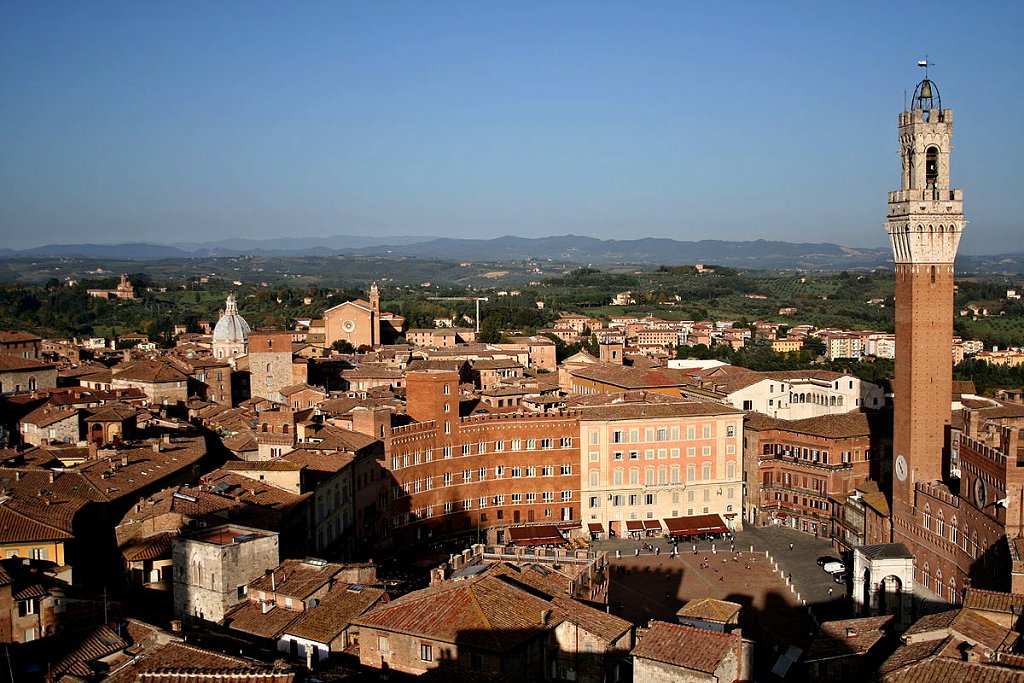 Located in the Susa Valley, along the banks of the Po River, you will find the city of Turin. With close to a million residents in the city and more than two million in the metro area, Turin has grown to become a major commercial hub in the country.

The city was also the capital of the Kingdom of Sardinia and as such there are many fine palaces and other ancient buildings located throughout the city. Find accommodation and hotels  in Turin: 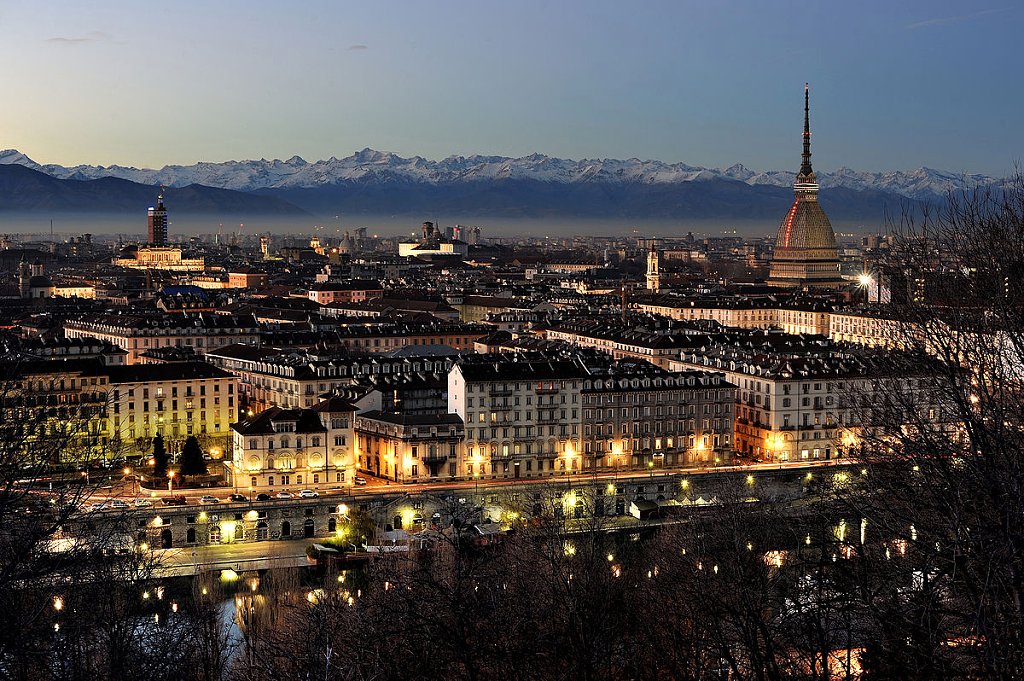 Located along the eastern coastlines of Sicily, one can find the city of Catania overlooking the Ionian Sea. Catania is the second largest city on the island.

The city dates back to the 8th century B.C. It has been devastated by earthquakes several times over the years and as such, there are many archaeological sites spread out throughout the area surrounding the city. Find accommodation and hotels in Catania: 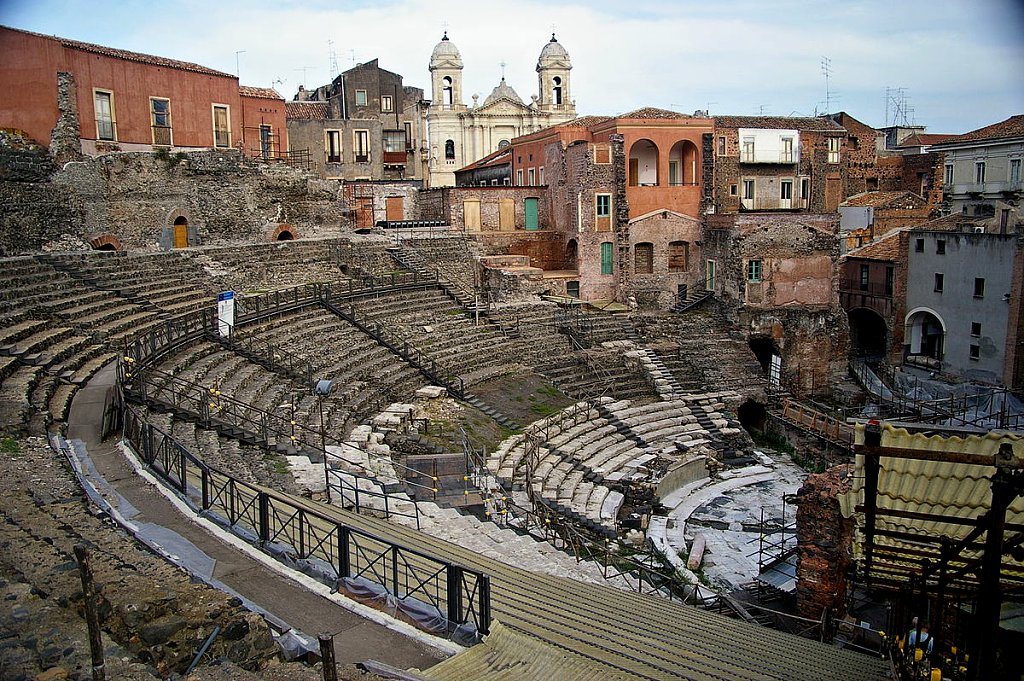 Located in the southeastern most corner of the island of Sicily, the city of Syracuse has grown to become one of the most popular destinations on the island.

It is known one of the most important Greek cities as well as being the birthplace of Archimedes, Syracuse offers more than 2,700 years of history that are waiting to be experienced. Find accommodation and hotels in Syracuse: 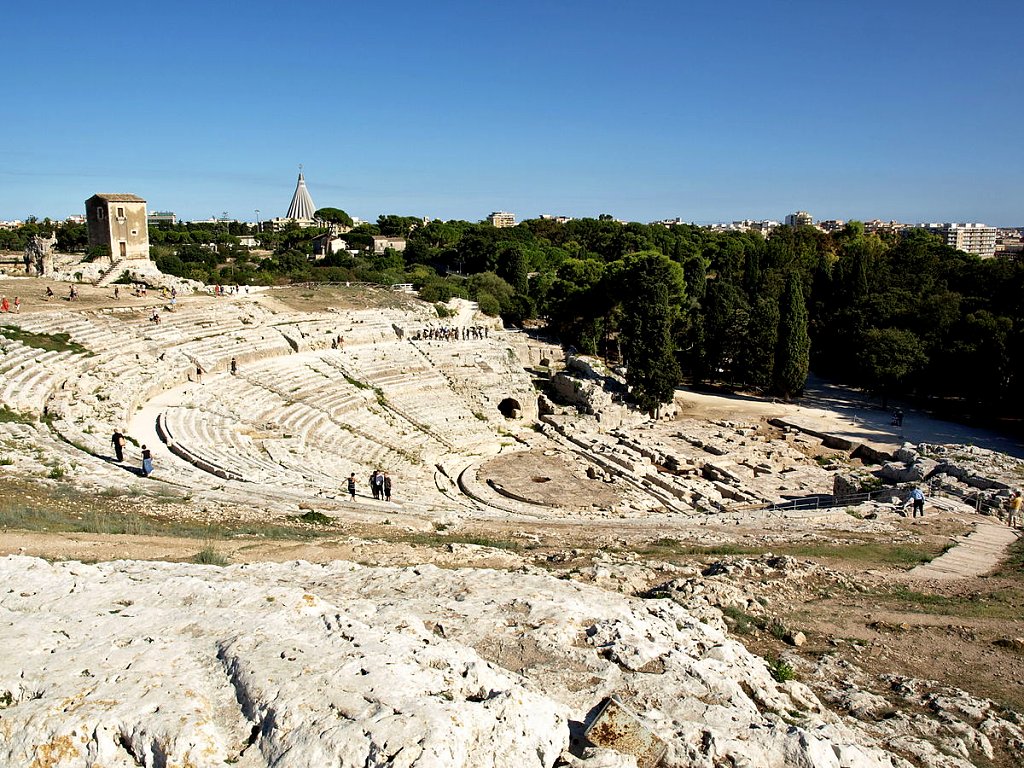 Syracuse & the Rocky Necropolis of Pantalica, Sicily by AlexanderVanLoon

The city of Lucca can be found in the Tuscan region of Italy along the banks of the Serchio River. The city is surrounded by imposing walls that were built back during the Renaissance, most of which still stands today.

There are a number of buildings in the city that date back to the 15th and 16th centuries, but the oldest resident of the city was built back in the 8th century. Find accommodation and hotels in Lucca: 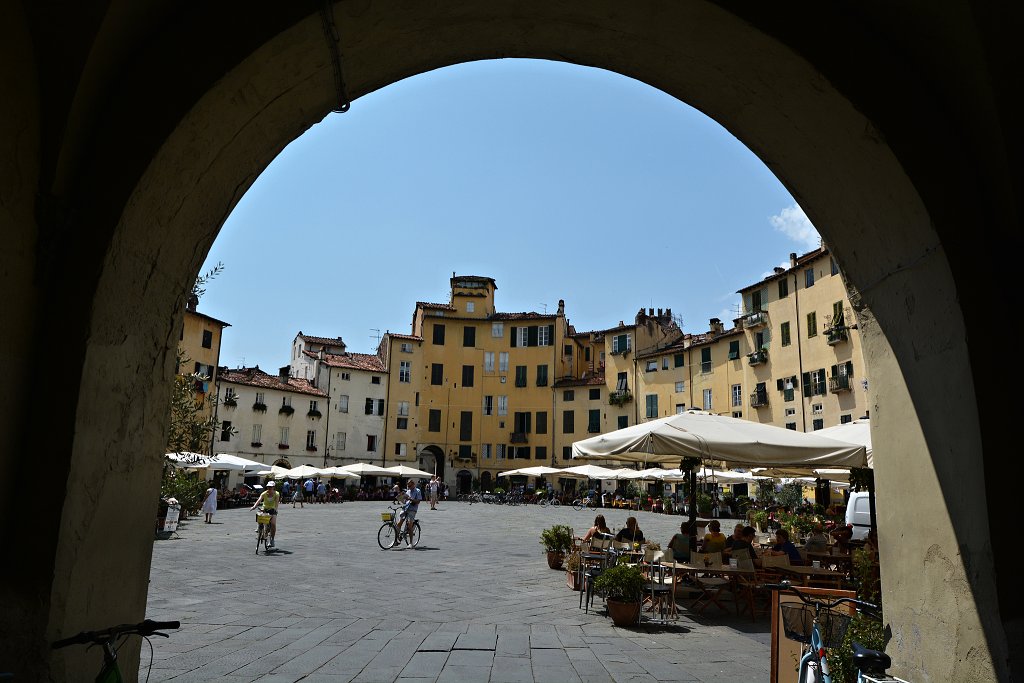 While located within the city of Rome and often considered to be part of Italy, Vatican City is a country all on its own. 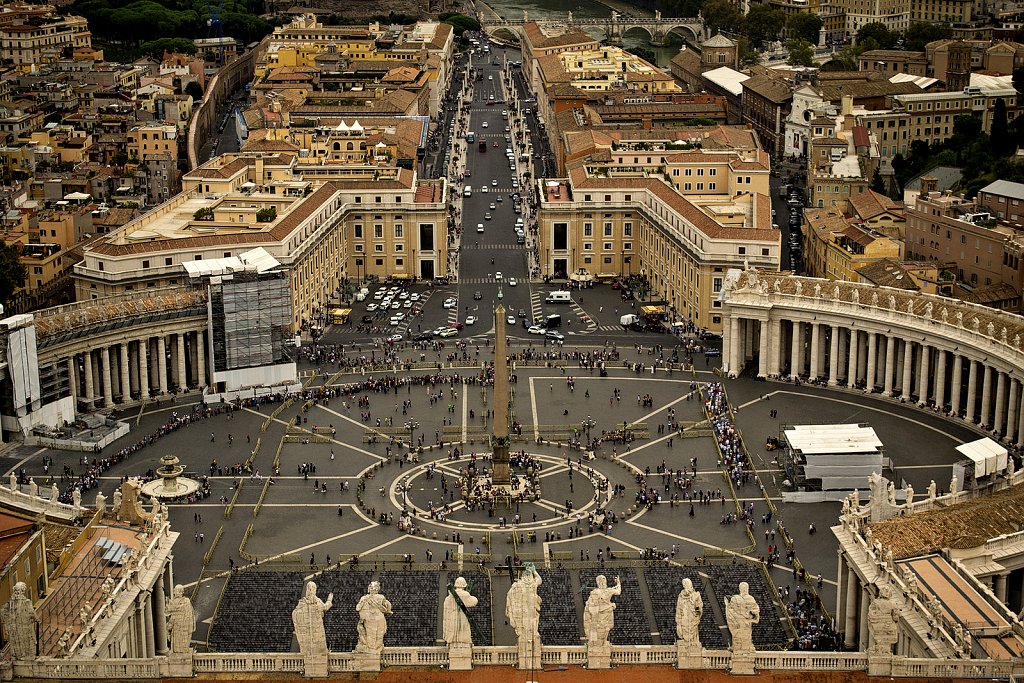 Genoa has a very beautiful historical center, which is one of the largest in Europe. It is also one of the UNESCO World Heritage sites. The town is dominated by Lanterna – a harbor lighthouse, on which you can see the coat of arms.

Every first weekend of the month you can visit its antique market, which is a great experience, even though you are not going to buy anything. I met Italians saying that Genoa is the most beautiful city in Italy at all. Find accommodation and hotels in Genoa: