A Guide to Forte Spagnolo, L’Aquila

Forte Spagnolo can be literally translated from the Italian to mean Spanish Fortress. It is a beautiful medieval castle located in the province of L’Aquila, Italy. Built in the sixteenth century, Forte Spagnolo is a popular tourism destination in Italy and brings in thousands of visitors each year from around the world.

If you are planning a trip to L’Aquila, make sure to include a tour of the castle and fortress on your travel itinerary. This guide will help you to plan your trip, learn more about the fortress complex itself, explore other nearby attractions and find affordable accommodations in the area. 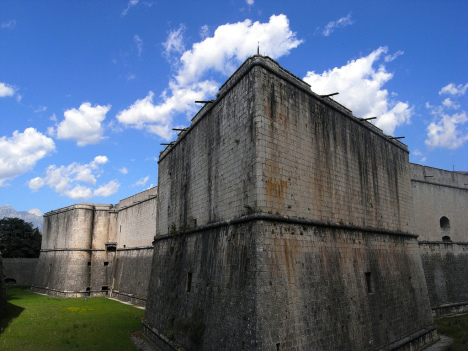 A view of the Forte Spagnolo / Photo licensed under the Creative Commons, created by kudumomo

At the turn of the 15th century, the city of L’Aquila was increasingly becoming one of the most politically and economically important cities in all of the Kingdom of Naples and even in all of Italy. During battles of the 16th century, both France and Spain fought to take control of the city. When the Spanish eventually gained control, thanks in large part to the Viceroy Philibert of Orange, a giant fortress was erected at the highest location in the city.

The job to design and construct the castle was handled by Pedro Luis Escrivà, a Spanish architect. The fort is unusual because it does not actually protect the city. Instead, the guns point toward the city itself in case of an uprising of the people. In the 19th and 20th centuries it was used as a prison but during World War II it was damaged after German occupation. In the past few decades extensive restoration has taken place and now Forte Spagnolo is both a tourism destination and a fascinating Museum.

Today visitors can tour the fortress as well as the interesting museum which it houses within it. Explore the grounds around the fortress, tour the towers or just walk along the now empty moat. The museum takes up three floors and boasts a wide range of exhibits. The first floor is devoted to dinosaur skeletons unearthed in L’Aquila over the last century as well as artefacts from nearby Roman settlements.

The second floor boasts a collection of medieval art. Most of the works are painted by Italian artists. The final section of the Museum is full of modern art that is exclusively done by Italian painters and sculptors. Admission to the Museum is €4.13 per person, with discounts for students, children and seniors.

Other Attractions in L’Aquila

The city of L’Aquila has much more to offer visitors than just the Forte Spagnolo. Perhaps the most impressive attraction is located just outside of the city walls. Called the Fontana delle 99 Cannelle, it is a giant fountain that has great significance to the city.

There are 99 different founts on the fountain, each of which represents one of the 99 churches that were once a part of the city. Another attraction in L’Aquila is the daily market that takes place in the Piazza del Doumo. Here you will find handmade souvenirs, delicious cooked foods and fresh produce to take home. 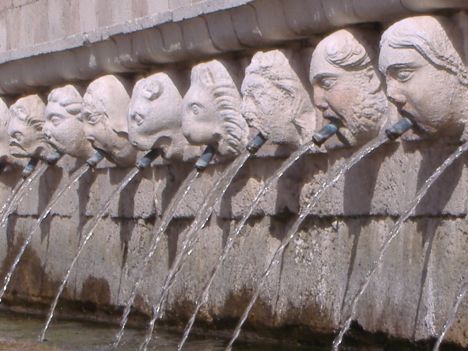 Some of the 99 founts at the Fontana delle 99 Cannelle / Photo licensed under the Creative Commons, created by Luigi Guarino

As a popular tourism destination, there is a large number of accommodation options in the city of L’Aquila. Those who want a luxurious holiday should seek out some of the Italian villas in and around the city (e.g. here: http://www.holiday-rentals.co.uk/Italy/r39.htm). These often large holiday homes can be the perfect option for an exclusive and upscale vacation in the Italian countryside.

Other options to fit within any budget include local guesthouses, private rental apartments within the city walls and even some contemporary hotels that cater to guests from around the world.