Procida is the smallest of three islands in the Gulf of Naples. Unlike its two bigger sisters – Ischia and Capri, you can do whatever, but it is almost impossible to find it in any travel agency’s catalog. The island is located between Capo Miseno and the thermal island of Ischia.

It is a part of Campania region and has a population of about 10,000 lucky inhabitants. Procida Island covers an area of ​​4.1 square kilometres. It has jagged coastline which is 16 kilometres long. 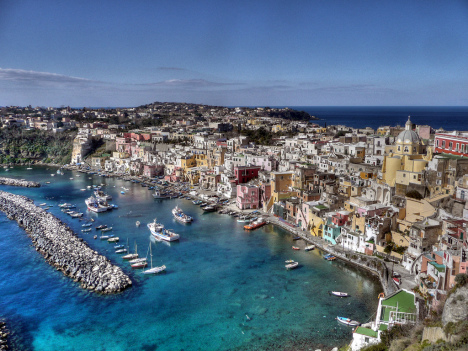 The highest point of the island is Terra Murata (91 meters). Procida is of volcanic origin (set of four volcanic explosions). The island has never been “in vogue”, which seems completely conforms to local residents.

They retain a long tradition of seafaring and fishing as a means of livelihood, and so ostentatiously express their lack of interest in possible revenues from tourism. There are mostly fishermen living on the island and repairing a fishing net is part of their daily lives. 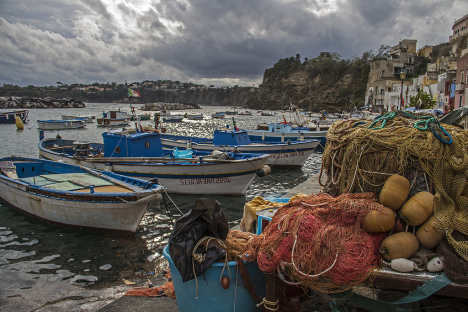 Fishing boats and nets in Procida island by General Cucombre

Tranquility and picturesque landscape of vineyards, orchards and vegetable gardens in the east and north of the island between Punta di Pioppetto and Punta Ottimo emphasize a unique charm of this humble island. During the summer, they are mainly Italian families with children who are coming to the island for holidays.

In 1957, it was nothing else than Procida island where the first underwater aqueduct in Europe was built. Several writers set their novels here on the island. The best-known novel is “Graziella” by Alphonse de Lamartine, who came to Procida in the early 19th century with the French army. Another well-known novel is “L’Isola di Arturo” (1957), one of the greatest works of novelist Elsa Morante. 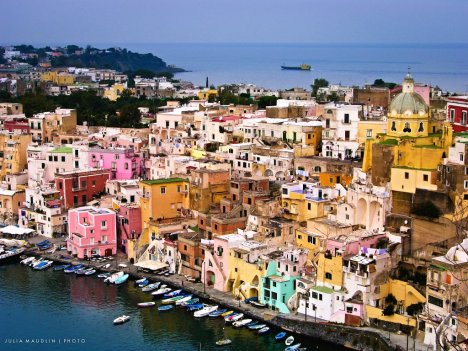 Because of its beautiful skyline, Procida was a frequent target of film crews. Some of the most popular films include “Il Postino,” or “The Talented Mr. Ripley.” The patron saint of the island of Procida is St. Michael, who is celebrating every year on 29th September.

In the southwestern part of the island, at 14 km long coastline, there is a small natural harbor Chiaiolella. In the winter months, the harbor is filled especially by fishing boats, while in the hot summer there are mainly luxury motor boats and yachts of Neapolitan elite that is looking for a quiet place around the coast. 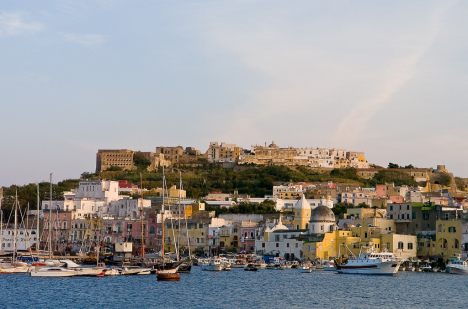 What to visit in Procida 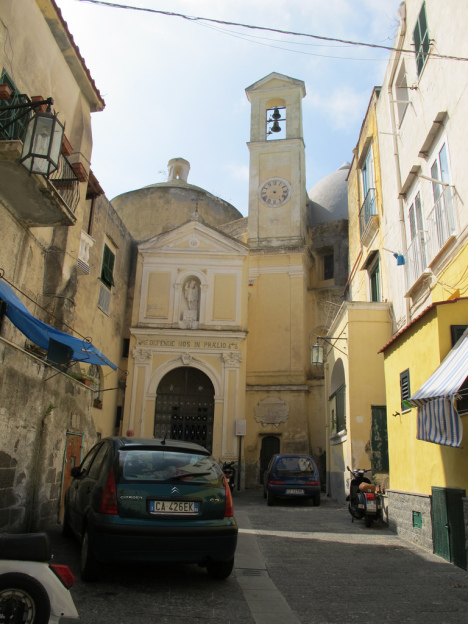 Chiesa Madonna della Pieta is a small white church from 17th century that can be found in the main port of the island.

Terra Murata is a fortified place which rises at an altitude of 91 meters, and is therefore the highest point of the island. The first fortification was founded here in the 16th century, and today, a massive fortress is still well visible from afar.

Procida Island is dotted with lots of stunning, sandy beaches that provide a good opportunity to enjoy the sunshine and warm Tyrrhenian Sea. Procida is mainly about sailing holidays.

For many people, it is a dream vacation that can become reality right here, also for those who are not experienced in yachting. In the port of Marina Grande, it is possible to rent a boat – if necessary also with the captain. The waters around the island are also very interesting for divers.