City of Alessandria lies on the south-eastern part of the Italian region of Piedmont and its name was given in honor of Pope Alexander III in 12th century. Do not mess this city with the Egyptian Alexandria.

In the past Alessandria had a very strategic location, therefore it was a military centre, which reflected in its architecture. However the strategic location still remained, there is a major railway junction that connect the major cities of northern Italy. 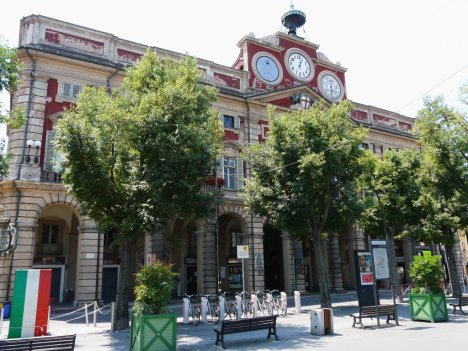 Photo licensed under the Creative Commons, created by Davide Papalini

Top sights to see in Alessandria

The center of all events in Alessandria is Piazza della Libertà, where is located the Palazzo del Municipio – City Hall. The building with red facade and special clock with three dials. Near the square is the new main cathedral built in neoclassical style. Another interesting monument is the oldest church in Alessandria, Santa Maria del Castello.

It represents a cross of several architectural styles, from Romanesque to the Renaissance. As already mentioned, Alessandria was a military center, so there are numerous monuments associated with it.

The entire region of Piemonte is known for the manufacture of chocolate and other sweets. This includes also the city of Alessandria. During the year, it holds several fairs and celebrations.

The most famous is the Salone del Biscotto Piemontese, during which many local producers offer a taste of their traditional products at the special markets. If you prefer chocolate you should certainly attend a famous celebration Alè Chocolate.

In addition to tasting different kinds of chocolate you can admire chocolate sculptures or try the chocolate bath. Both of these events are usually in October.