Assisi – a beautiful medieval city in the heart of Italy

Assisi is one of the most famous towns in the Central Italian region of Umbria, and perhaps throughout Italy at all. It stretches along one side of Monte Subasio and perfectly fits into the overall panorama of the surrounding area.

Assisi was founded already at the time of the Etruscans, but it is better known as a birthplace of St. Francis and St. Clare, the two founders of religious orders – Franciscans and Poor Clares. 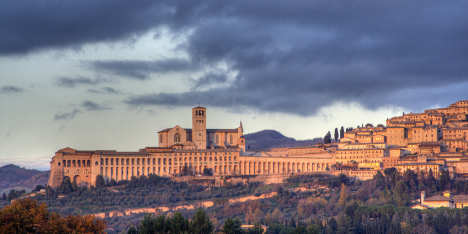 Assisi is a beautiful medieval city that for centuries remained almost untouched. Its dominant feature is of course the Monastery of St. Francis. It dates from the 13th century and was built at a hill called “Hill of Hell” as it was a place where the worst criminals were executed. After building the temple this place was renamed to “Hill of Paradise” because there were laid the relics of a saint. The centre of town is formed by Piazza del Comune which is a main place where locals come together at various events. There is Foro Romano, where you can find a variety of archaeological excavations and the remains of the Roman period. 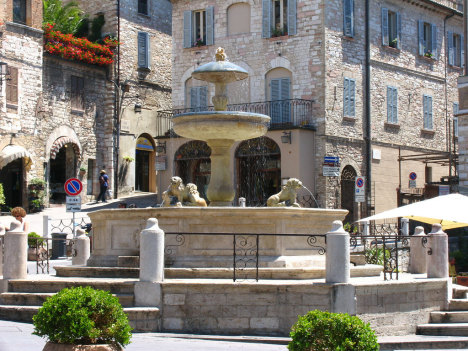 Other monuments in the square are e.g. the Torre del Popolo of 13th century, in which is situated the main bell of Assisi. Furthermore, there is also the temple of the goddess Minerva – the most impressive Romanesque building.

Assisi houses many festivals, both of religious and secular character. Perhaps the most interesting of them is Calendimaggio di Assisi. It takes place here on the first Thursday, Friday and Saturday in May and celebrates the spring and the joy of life. Residents walk through the streets in historic period costumes. The two original quarters compete for a winning battalion in the best clothes, best singing, etc.

However, this certainly is not all you can see and enjoy in Assisi. You can spend here quite a peaceful holiday, e.g. with tasting delicious local wines Assisi Rosso or Assisi Grechetto.