Bologna – a home to the world’s oldest university

The city of Bologna with approximately 400,000 inhabitants lies, to the detriment of the majority of tourists, in the shadow of more famous cities like Rome, Florence or Venice. However, it has also as much to offer and its advantage is that is not overcrowded.

Bologna is the capital and largest city of Emilia-Romagna, located approximately in the middle of this region and forms its centre. If you decide to visit this area, Bologna will certainly be the best starting point for you. The main roads leading south to Rome or Florence cross through Bologna, where is also an important railway junction. 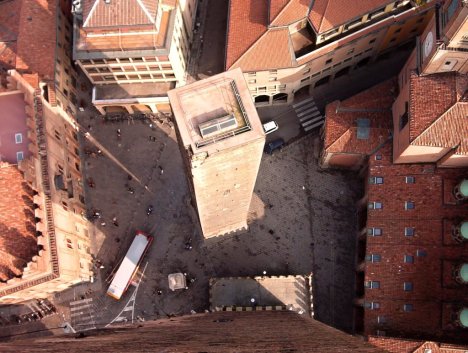 Towers of Bologna as seen from the higher one, Emilia-Romagna, Italy by Luca Volpi

The history of Bologna

The city was founded by the ancient Etruscans. In Roman times it became a colony of Rome and an important center of trade. From the Middle Ages is considered a place of education, because the world’s oldest university was founded here (in 1088).

At the university studied the most famous scholars, such as Dante Alighieri, Petrarch, Erasmus of Rotterdam, Copernicus and Thomas Becket.

Bologna is a beautiful city indeed, perhaps does not have so many prominent landmarks from the history of architecture, such as Rome, but it is compensated by its character, is very cozy, attractive and pretty.

In the city center, in the streets and squares you can find several beautiful brick houses and palaces. Bologna is a large city, so you have still lots of places to get lost. 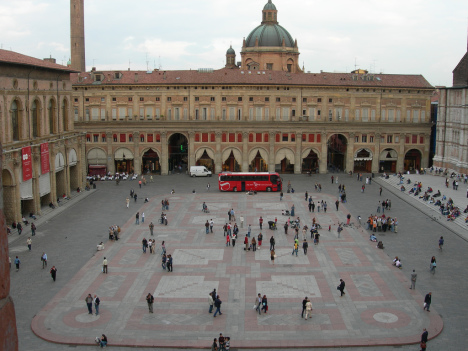 In the heart of the city you find the main square Piazza Magiore, the perfect example of Italian culture with original cafes, bars, benches and fountains with statues, the noble façades of the palaces and churches.

Life on this square is really amazing. Certainly, it is worth to sit here for a while and enjoy an espresso or cappuccino and watch the bustle around. It is perhaps the most attractive part of the city.

In the middle of the square stands the great Palazzo di Re Enzo, which divides the square into two parts. 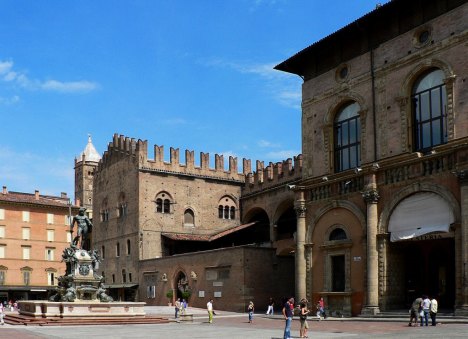 Palazzo di Re Enzo and Neptune fountain by Patrick Clenet

One of these two parts (divided by Palazzo di Re Enzo) boasts the largest church of Bologna and one of the largest Christian churches at all! And even though it is still not finished. Basilica di San Petronio is the temple of the city’s patron.

You will be surprised by its size and when you go inside, you find yourself in a huge high ship with a number of art works fading in the vast space. It is good to mention that this is not a bishop’s cathedral, but the largest parish church of the world. 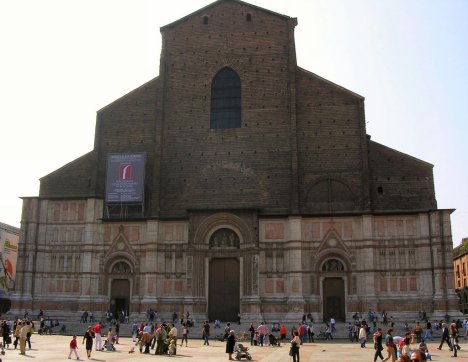 Around the square there are also several palaces. Some of them have battlements, some balconies, but all are interesting. Perhaps the most interesting part of the square is the Fontana del Nettuno. The fountain features a bronze statue of the ancient god Neptune which belongs to the most photographed landmarks of the city.

From this square run the streets into all corners of Bologna. And only them will show you the real attraction of this city. Whether you go in any direction, all around you will see beautiful brick houses and palaces with great arches and distinctive windows. Therefore, come out to wander the town and its streets. It’s really worth it. 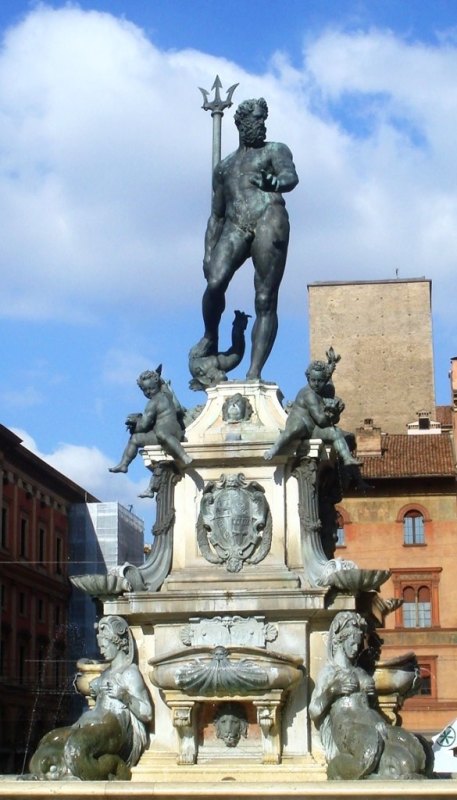 The absolutely most important building of the city include the large object Palazzo dell Archiginnasio that housed the famous University of Bologna. It was built by Pope Pius VI.

The aim was partly to prevent the expansion of the neighboring parish church, and partly to get the college under papal control. Either way, it is worth to enter courtyard and see the walls covered with hundreds of coats of arms. The decor is unique and offers unexpected experience. 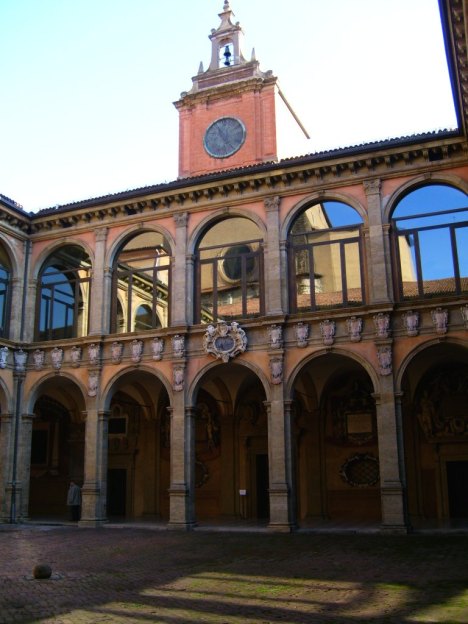 Following Via Rizzoli you will get to the symbol of the city – Towers of Bologna. Those are two high stone towers called Torre Asinelli and Torre Garisenda, jutting high above the roofs of surrounding palaces.

This part with surrounding streets are all commercial shopping area where you’ll find everything from luxury boutiques and restaurants to food and book stores.

Towers of Bologna by Patrick Clenet

Besides the above mentioned places like the church of San Petronio in the main square, where is also Neptune fountain and towers Torre Asinelli and Garisenda, Bologna offers an inexhaustible range of other monuments and places of interest.

Basilica di San Domenico is a great church, where is buried the founder of the Dominicans, Saint Dominic. In his funeral chapel, there are many statues, the most famous of them are from Michelangelo. The church located on the Piazza di San Domenico is worth seeing. 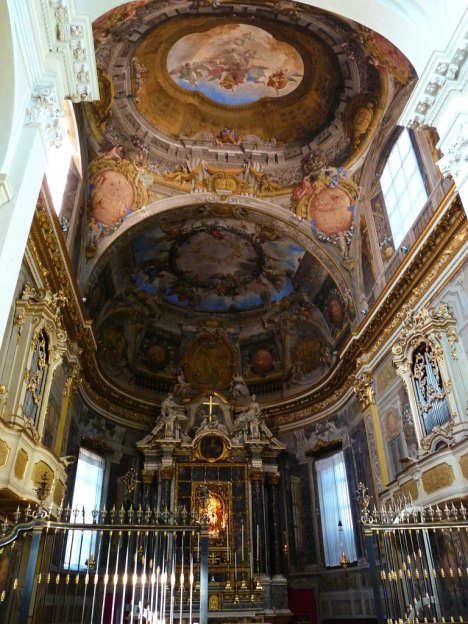 The Jesuit church of San Paolo Maggiore offers a contribution to the Baroque face of the city. It has monumental and impressive ceiling fresco and a rich marble decor. Exterior is fully subordinate to its surroundings – is built of red bricks.

Extensive city center still offers numerous other churches, temples and monuments. However the charm and attractiveness of Bologna, is not hidden in any single monument. You do not have to see anything from the cultural treasures and still enjoy the city like no other. 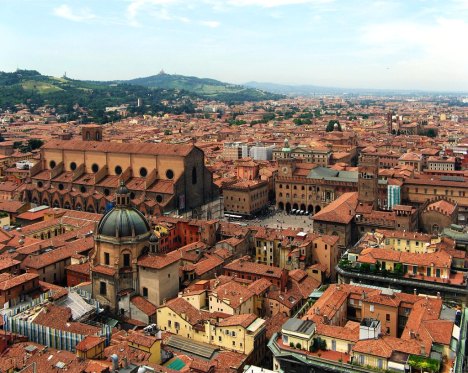 Brick architecture with arches, distinctive windows and romantic corners in narrow alleys, or broad streets lined with large shops and boutiques – it is Bologna. Another perfect feature of Bologna is that there will always be more locals than tourists.