Ca’ d’Oro Palace, also known as Golden House or Palazzo Santa Sofia is one of the most admired palaces on the Grand Canal in Venice. Its name got mainly because of the golden lining, which once adorned its magnificent facade.

The palace was built in 1420 for Marino Contarini. Later was tastelessly restored by several owners. In 1927 was given to the state, and after several years of tasteless renovations and modifications was finally restored into its original Gothic appearance. And then the palace could finally be open to the public. The building is now a beautiful example of Venetian Gothic jewels. The facade of the palace is beautifully decorated with gold. 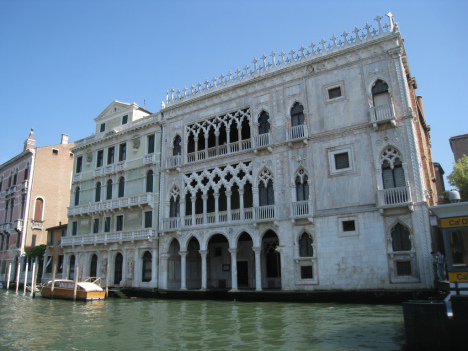 Palace is now a home to the Galleria Franchetti, which offers an amazing blend of medieval painting and sculpturing. Gallery is not large, occupies two floors and includes several smaller rooms and a main hall called “Portege”. Such a hall was in the past in almost every Venetian palace ensuring good venting during the hot summer.

Collections in the gallery are not too large as well, but they are of a high quality, and you can see several masterpieces here. The treasures include a picture of St. Sebastian by Andrea Mantegna, painted in 1506. It is located on the first floor of the palace. St. Sebastian was at that time quite frequently displayed, had been invoked as a Venice’s protector against plague epidemics.

Among other notable works stored in the gallery of Ca’ d’Oro palace is “Bust of a young couple” from Tullio Lombardo from 15th century. Beautiful are also six bronze reliefs from Andrea Riccio, paintings by Vittore Carpaccio, Giovanni Bellini and Antonio Vivarini. There are also works of art by Florentine masters, like Luca Signorelli and Antonio da Firenze, and many other famous and less famous sculptures and paintings.

To the second floor you can get through the beautiful staircase. Here you will find a room full of Flemish tapestries, which were at that time more valuable than paintings. Among the tapestries are hidden portraits by Tintoretto and Van Dyck.