The popular San Martino di Castrozza ski area is just one part of the well-known Dolomiti Superski carousel that includes 11 other ski destinations it the region. There are countless runs located throughout the ski area which is accessible via a free shuttle program which takes skiers from their hotels to the various lift facilities located throughout the area.

There are more then sixty kilometers of slopes in the San Martino di Castrozza ski area that range in altitude from 1,404 meters to 2,357 meters above sea level. There are twenty-five different ski lifts that will take you to the various slopes. With a maximum capacity of nearly 3,000 skiers per hour, the ski lift facilities in San Martino di Castrozza are modern and efficient. 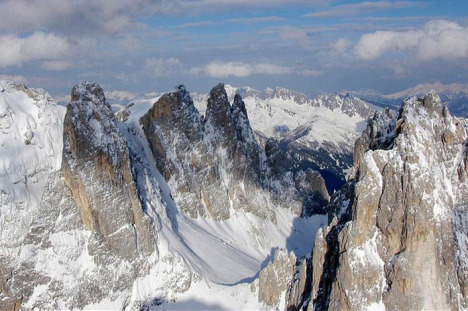 The town of San Martino di Castrozza is the heart of the San Martino di Castrozza ski area and sits at an altitude of 1,450 meters above sea level. It is home to a popular resort and surrounded by enchanted woods that have been the source of countless legends over the centuries. Not only can you go skiing in and around the town, but there are a number of other activities that can be done throughout the area. There are many amenities in the town which includes restaurants, bars and shops.

Serviced by an efficient and quick gondola, the Cloverde run is a two kilometer long red run that can be accessed from the center of town of San Martino di Castrozza. The run is well-lit so it stays open late into the evening hours. You will find the Col Verde lodge to be very welcoming when choosing to ski late into the evening. 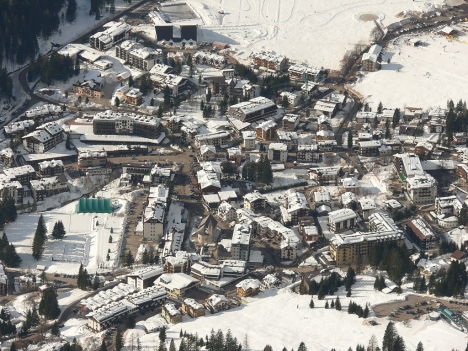 Walking across the surface of the freshly powdered slopes and trails that can be found throughout the area can be a fun and rewarding experience. With the help of snowshoes which can be bought locally or even rented, you can walk some of the finest specially made trails in the region. Countless people over the years have found snowshoeing to be fun.

While most people prefer to make use of the ski lifts that can be found throughout the San Martino di Castrozza ski area, not everyone likes skiing on the sometimes overly crowded slopes. In order to get out there and ski in the untamed wilderness, you will need to learn the ancient discipline of climbing the slopes with skins on your skis. Ski touring is a very popular activity in and around the ski area.