Civitavecchia – the most important cruise ship port in the Mediterranean

Civitavecchia is a town with 50,000 inhabitants and an important port on the coast of the Tyrrhenian Sea. It is located about 80 km north-west of Rome.

Port as a transport hub

The port has two piers and a large breakwater with the lighthouse. It mainly serves to large ocean-going ships, cruise ships and ferries and is considered the main port for connection with Sardinia, Sicily, Tunis and Barcelona. The city is trying to assert itself as the most important cruise ship port in the Mediterranean (increased a capacity from 50 to 500 ocean-going ships). City (and port) is also a railway and road traffic junction. 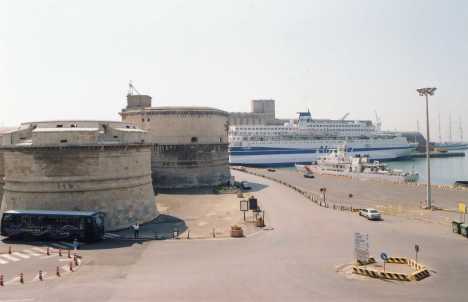 The present city is situated above the remains of Etruscan settlement. The port was built by Emperor Trajan at the beginning of the 2nd century. In the Middle Ages the city became a Byzantine fortress, conquered by the Saracens, and later joined the papal state. Civitavecchia became a free port. The Papal troops opened the gates of the Italian army, and so the port in 1870 joined the nascent Italian Kingdom. Since 1859 the port is connected with Rome by a railway.

The main monument in the town is the massive fortress Forte Michelangelo measuring 100 x 80 metres which was built by many architects, including Michelangelo Buonarroti. Its construction was finished in 1535. The fort served as the defence of the harbor, and therefore have really thick walls (from 6 to 7.6 metres)!

Other sights include The Castle or the Rocca that was rebuilt in the 15th century by Pope Sixtus V. Later, there was built also the Apostolic Palace. The cathedral of Saint Francesco of Assisi, built by the Franciscans, is a nice mix of neoclassical and baroque styles. Its current appearance dates from the 18th century.

The city was almost completely destroyed during the World War II and although it was recovered after the war, it still does not have so attractive historic center.