If you are new to skiing the difficulty of the various runs at your chosen resort is a big issue. Trying to tackle something a little too extreme when you are not ready could lead to an accident and at the very least destroy your confidence. Although all runs are colour coded that might not be particularly useful as there are no firm rules for grading the runs leaving some beginners’ slopes more severe than others marked for intermediate skiers.

In Europe pistes are marked green for beginners, blue for easy intermediate, red for more extreme intermediate and black for advanced. In America the system is different and runs are shown as open green circles, closed green circles, blue squares and black diamonds. Two black diamonds indicate the most extreme runs. This all sounds fairly straightforward except that it is the resorts who decide how to code their runs and so there is no consistency at all. It is not uncommon for skiers to head for blue runs which they feel they will be comfortable with only to find that they are much steeper than a red run they have seen elsewhere. 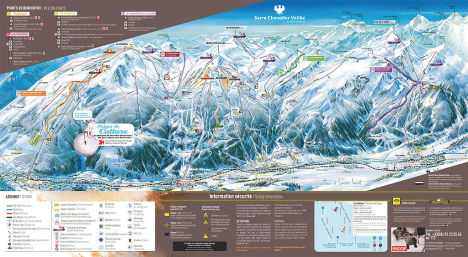 Much of the confusion arises out of the resorts using different criteria to grade their pistes. Some may put the emphasis on gradient whilst others will factor in the angle of the turns and the width of the piste. Many feel that some resorts are merely assigning green and blue codes to their easiest runs no matter how difficult they actually are in order to avoid putting of novice skiers from visiting the resorts! Other resorts may overstate the thrills on their most challenging runs to attract advanced skiers. You really won’t know what you are dealing with until you arrive.

I have experienced problems with the codes myself. On my first skiing trip I split my days between two resorts in Italy. Having reached the point when I was comfortable with the blue run at Tarvisio I decided to try one of blue runs at Sella Nevea. Everything was going well until I traversed a large sweeping bend only to discover an extremely steep drop around the corner that I didn’t feel confident to tackle. I then had the humiliating experience of having to remove my skis and slide down slowly on my backside!

If you are unsure whether you should attempt a run or not then either send a more advanced skier in your party down the run to test it out first or ask other skiers for advice. Enquire as to how the run compares to one that you have safely completed but still proceed with caution as one person’s easy piste is another’s nightmare! If you decide to take on a lengthy run then ski something simple first to get comfortable but don’t leave the main event until late in the day. If the run proves to be beyond your skill level or anything goes wrong you will need plenty of time to get down off the mountain.

On my excursion to Italy a friend who was also on his first trip decided to ski down from the top of the mountain with my partner who is a very good skier. It should only take 20 – 30 minutes to tackle the run but two hours later they still weren’t back and I was contemplating calling out a search party! They made it in the end but there had been several tumbles en route and a lost ski which was retrieved by a snowboarder. My friend arrived back with no broken bones, all his ski equipment present and both his skies in place but it had been quite an adventure!

Sally Stacey is a keen writer and business owner who divides her time between writing and running her shop.

If you are planning your next trip to Italy book hotels, flights, rental cars at best price guaranteed!
Leave a comment