Suspended Coffee – The Dark Roasted Tradition Of Paying It Forward

Italy is known for having some of the finest coffee in the world, so it’s no surprise that a trend sweeping through Europe originated in this country of love and generosity. Caffè sospeso, or suspended coffee in English, is a cup of coffee bought and paid for by another customer to be enjoyed by anyone who could use a cup of coffee, but is unable to afford one.

It really is that simple. Coffee shop patrons can buy a “suspended coffee” whenever they choose – either as a one time gift, or every time they order. The coffee shop then gives a free cup of coffee to anyone in need, no questions asked. 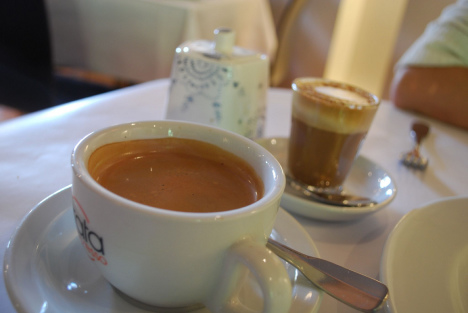 The History Behind the Tradition

The tradition is old; some accounts date its origins 100 years ago, but there’s no question it started in Naples, Italy. It was common after wars, when so many had lost all they had, to pay for an additional coffee and provide a soothing cup of coffee for a fellow Italian. Barista’s greeted guests with “Would you like a coffee, sir?” indicating that there was coffee for you regardless of your ability to pay.

The practice went dormant during the prosperous mid-century but as the economic cloud has fallen across the globe, suspended coffees reemerged; first in Bulgaria and Spain, then across the continent.  A website dedicated to tracking participating locations sprung up at www.coffeesharing.com. There you can find one of the 166 shops honoring the tradition in nations all over the globe. There is no upward limit, and participants can donate as little as a dollar. Even Starbucks has gotten into the spirit, passing their version of suspended coffees on through a charity called Oasis.

Neapolitan journalist Luciano De Crescenzo is partially credited with reviving the practice by highlighting it in his 2008 collection caffe sospeso: Saggezza quotidiana in piccoli sorsi. (The Coffee Suspended: Daily Wisdom in Small Sips). One Facebook page offered stickers and signs for cafes to display advertising the opportunity because in areas where the custom is unknown shops have a hard time giving away all their suspended coffees. Working through local charities is one way they’re getting the word out there, but shop owners want customers to know that “in need” does not necessarily mean “homeless.” For example, a businessman dressed in a suit going to multiple job interviews or a tired mom would both be given a much welcome cup of coffee.

While coffee is the mainstay of the movement, other locations have gotten into the spirit of giving with their own pay it forward options. Chinese vendors offer suspended noodle plates and Belgian fry stands reserve cones of French fries on a suspended basis.  In the United States we’ve had a modified version of paying for the customer’s order behind yours at the drive through.

Two shops in the US are also participating in the suspended coffee program so visitors to Portland, OR should stop by Olé Latte Coffee and Houston, Minnesota’s Barista’s Coffee House. Or speak to your local café and get them signed up at http://www.coffeesharing.com/places.

Karen Veazey is a freelance writer for a variety of travel, technology and entertainment websites and one of the only people on earth who enjoys the desert heat. Among the things she is most proud of is her pristine credit score she achieved with the help of Alliance Credit Restore. She is currently pursuing an MFA degree in Creative and Professional Writing, focusing on nonfiction.

If you are planning your next trip to Italy book hotels, flights, rental cars at best price guaranteed!
Leave a comment