Urbino – one of the best preserved historical towns in Italy

Central Italian town, Urbino, lying at the border of the Marche region and Emilia-Romagna region, is considered one of the most beautiful towns in the country. Since it is situated on two hills, offers a splendid views of the surrounding countryside.

The town has a rich history, was founded by the Romans and in the 6th century played a very important role during the Gothic Wars. Significant was the year 1657, when Urbino came under the patronage of Vatican. It joined Italy later during its unification.

Today Urbino is one of the best preserved cities in Italy, boasts beautiful streets and huge Ducal Palace. Its great historical value even exceeds some of the more famous Italian cities. It is a very popular and well-maintained tourist town.

Once it was a home to a major European Renaissance courtyard. The greatest glory city enjoyed in the 15th century during the reign of Federico da Montefeltro. At that time the local dukes were really very generous and invested a lot to the artistic and cultural life in the city. Urbino is also the birthplace of the famous painter Raphael, whose birthplace and museum has become one of the most visited tourist attractions of the city.

The dominant feature of the city became the Ducal Palace (Palazzo Ducale) of 1465 situated on the hill, which is a beautiful example of the Renaissance style in Italy. Along with the nearby neoclassical cathedral Duomo di Urbino form breathtaking panorama of the city. The main architect of this unique building was a Dalmatian native Luciano Laurana. However in the medieval town centre spreading on an area of about 1 km2 you can find much more interesting sights and monuments to explore. This beautiful historic centre is since 1998 a UNESCO World Heritage Site. You will find here several religious buildings, such as the Church of St. Domenico, Church of St. Agostino and Church of St. Francis. 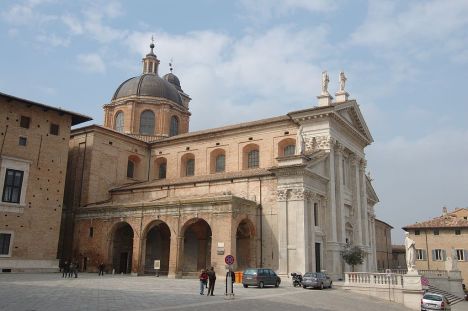 To get to the city you will have to go through one of the medieval gates, which are the remains of the city’s fortifications. The main square Piazza della Repubblica is full of tourists, and also serves as the meeting point for students as Urbino is, in fact, a home to the old university. If you are interested in art, then go to the gallery Galleria Nazionale delle Marche, where you can see beautiful works of Italian artists. In the town there are also several preserved ancient chapels such as the Oratorio di San Giuseppe and the Oratorio di San Giovanni Battista with amazing frescoes. The diocesan museum Museo Diocesano is here as well to show you the collections of ceramics, glass, and religious objects.

Local people are doing their best to keep Urbino a valuable historical town and therefore they also keep the original traditions and customs. Every year, in September, hold celebration Festa dell’Aquilone associated with traditional production of flying dragons. Traditions are kept also in the production of Casciotta di Urbino – a cheese made from sheep’s and cow’s milk producing since the ancient times.