More than ninety years have passed since 1918, the year in which thousands of italian and Austro-Hungarian men battled in the mountains of Cortina D’Ampezzo in the terrible clash of the First World War. It was during this conflict that Cortina was annexed by the Kingdom of Italy, an event that can be relieved at the new open-air museum of the Sasso di Stria in passo Falzarego. Along with the museum of Lagazuoi, 5 Torri and the Forte Tre Sassi, the Sasso di Stria comprises one of the most complete examples of a World War One fort in the Dolomites. Twelve year in the making, the museum is the result of 6000 days of volunteer work on the parts of the ANA (national apline association) and the Alpine troops, who restored 3 Km of tunnels, hundreds of meters of trenches, and numerous military stations.

The restoration of the Sasso di Stria is a major hallmark for the conservation of sites significant in the tragic campaign between Italians and Austrians at Cortina D’ Ampezzo. It was from the Sasso Stria that the Austro-Hungarians illuminated Mount Lagazuoi at night to prevent Italian attacks from fort Cengia martini. Many of the encampments built by the Third Regiment of the Kaiserjager have been excaveted and can now be toured all the way up to the peak.

Where 1915 when WW1 started, so this year 2015 celebrate 100 years. If you are in Cortina we suggest the free museum about First World War at Alexander Hall. See the picture below: 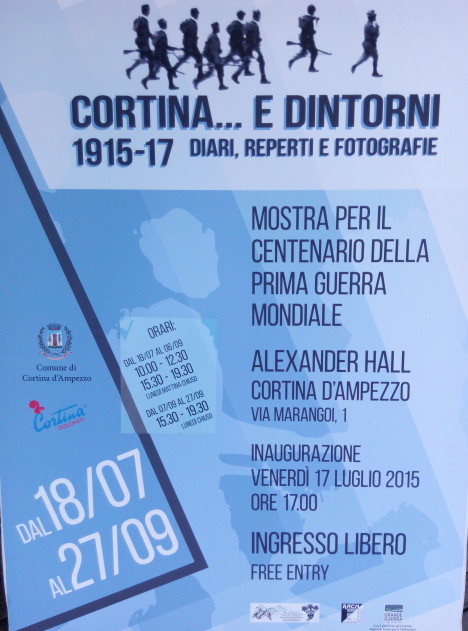