Located in the Hyblaean Mountains of Sicily, one will find the Cavagrande Cassibile Canyon which was slowly carved into the rocks by the Cassibile River. The canyon itself is only ten kilometers long, but is nonetheless a picturesque region of the Sicilian countryside.

The cliffs of the canyon in some places are more than five hundred meters tall and are covered with a variety of tree species. Throughout the canyon, there are countless pools and waterfalls as the river makes its way to the sea. In some areas of the valley, swimming is permitted. 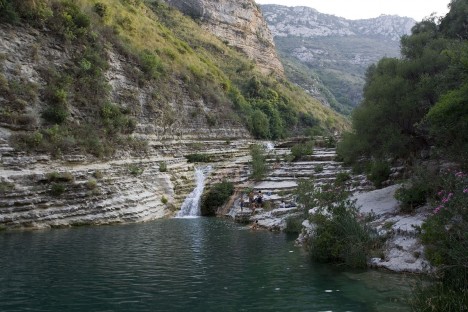 Most people who visit the Cavagrande Cassibile Canyon enter via the long since abandoned village of Avola Antica. However, it is also accessible through the settlement of Scala Cruci. The paths through the canyon are very rocky in many places so if you plan on visiting the area, make sure that you bring a good pair of shoes to protect your feet and ankles.

The golden limestone walls that the canyon is made from are home to a number of necropolis that date back to the days of the Greek Empire. The earliest settlers of the Cavagrande Cassibile Canyon date back to 1200 B.C. Their homes were literally carved into the sides of the cliffs of the canyon. 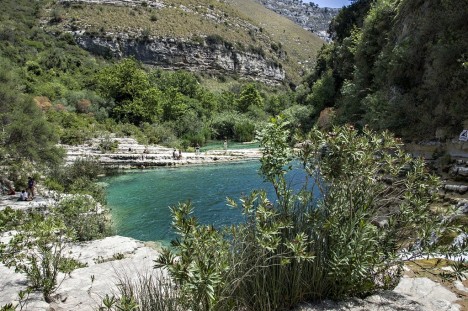 The area where the Cavagrande Cassibile Canyon sits is protected. There are a number of rare and endangered species of plant and animal that can be found within the canyon. The most notable of these is the Sicilian Rock Partridge.

There are also red foxes and martens that live in the woods surrounding the canyon. You may even catch a glimpse of the freshwater crab or the Italian Tree Frog when visiting the area.

More than four hundred different species of plant life live within the canyon. Some of them are considered to be quite rare; especially on the island of Sicily. The purple colored Sicilian Orchid can be found in the most remote locations of the canyon.

If you visit the area in spring time, then you can’t miss seeing the popular Sicilian Snapdragon as well as other beautiful flowers that call Cavagrande Cassibile Canyon their home.

Pools in Cavagrande del Cassibile, near Noto, Sicily by pjt56

They were led into battle by Demosthenes but were crushed by the Siracusan forces. As a result of their surrender, Demosthenes was executed and the Athenians were taken as slaves. 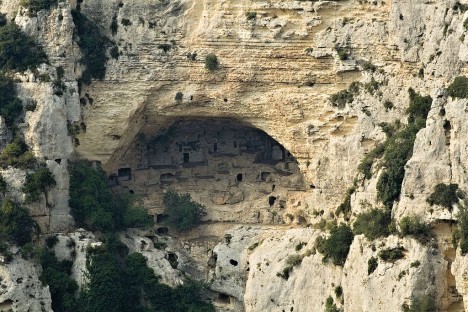 But the history continues even further, within the canyon you have to see a small cluster of cave dwellings, and even a complex system of houses built in the rock, arranged side by side on different levels and connected by a system of tunnels. These are ancient necropolis that dates back to the thirteenth century BC.

A trip to the area can take up an entire day of your vacation so plan accordingly. The simple beauty of the canyon is breath taking and once you arrived, you will not want to leave. Thousands of people make their way to the reserve and the canyon every single year to marvel in its splendor.